A year in and loving it 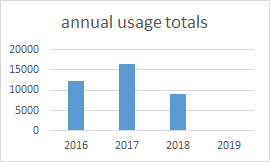 you can ignore 2016, that’s when I installed my solar panels and started obsessing about energy usage. I purchased Sense mid to late 2017 and reduced my annual usage by 40%. I very excited to see how it looks in 2019.

Great to see this. I’d love to know what changes you made based on your Sense data.

I think one of the biggest changes was with my hvac. I have two units and had been told that i had to always run them both with upstairs a few degrees warmer or I would burn up the lower unit because it would work twice as hard. I found this not to be true, at least in my house, so the upstairs is off, 50 cents/hr for the months they run.

I also added automatic waters on all the troughs at the barn to save wear and tear on the well pump. so they never cycle the pump at all, instead of filling them all at once which takes awhile and does cycle the pump.

another thing I did was stop running ceiling fans all the time. they draw a crazy lot of electricity and only help if you are in the room. you can also see that on watching how hard the heat pump or ac is working, or not.

I changed all my light bulbs to LED, although that isn’t really cost effective given the cost of LED bulbs, it will take years to make that back in electricity saved but it saves me from freaking about the lights being on.

and, I added a bearded dragon, with heat lamps 8-12 hrs a day and two fancy rats. - and that’s the other thing about the hvac, instead of leaving it on during the day when i’m gone, i found it’s still more effective to turn it off during the day and take the hit for it to catch up. I have a space heater and a fan for the pocket pets and they stay in a closed bedroom when the weather is extreme. saving about 30 cents an hour to keep them comfortable.

I’m curious to know what changes other people have made.

I think one of the biggest changes was with my hvac. I have two units and had been told that i had to always run them both with upstairs a few degrees warmer or I would burn up the lower unit because it would work twice as hard.

I’m not sure who told you that load of bunk, but I hope it wasn’t an HVAC installer.

I changed all my light bulbs to LED, although that isn’t really cost effective given the cost of LED bulbs

How much did you pay for the bulbs? Up here you can get them at the dollar store for $3 or less - the payback period at that price vs a 60 or 100W bulb used for 8 hours a day (entirely possible during the long dark hours of the winter) and the payback is measured in months.

I think it might have been the installer, but that is a long horrible story in itself…

on the light bulbs, i already had gone from incandescent to all fluorescent so the savings wasn’t that much.

ceiling fans shouldn’t be very high… mine are only 13 watts on high speed… @ 13w, they are pennies a day and help with comfort…

out of curiosity, what wattage are your fans using?

i’ll check them when I get in tonight…

Our usage is down 9.9%. That isn’t amazing, what is this is an Airbnb rental. We don’t control the usage of electricity at all. The cost reductions do not reflect the 12% higher occupancy in the highest energy consumption months.

So how did it happen? Sense, combined with some home automation, helped me identify what caused the consumption:

They included a mis-wired thermostat which only allowed for resistance heat vice heat pump heat.

I saw some significant temperature swings by some guests using the thermostat to suit their mood. Over 100 temp changes in a month is not that rare. Sleep at 65 and awake to 74 for example. Over three degrees calls for heat increase automatically turned on resistance heat, vice the heat pump. I was able to remotely disable that. I don’t change the temp remotely but there certainly have been times when I have tempted to. I have disabled the fan always on (vice automatic) I believe guests aren’t familiar with the thermostat or the effects of leaving the HVAC fan on all the time. In a Florida home with duct work in a 130 degree attic leaving the fan on with even a 5% air leak brings in constant hot air to a cooled home.

I determined that guests were leaving the slider open to a covered porch, enclosed with single pane glass to cool it off and then leave for the day. I wrote an automation IFTT procedure to shut off the AC if the slider was left open, similar to hotel chains or commercial buildings.

I found the large bank of florescent lights (240 watts) was turned on in the garage and left on after they opened the overhead door to the bright outdoors. That made no sense as the garage door has a light, like any garage door opener does. I installed an occupancy switch to shut the lights off when vacant 20 minutes.

And finally I installed smart outlet to shut off the cable boxes when the home is unoccupied, this has not paid for itself but it gives me satisfaction.

apologies that this took so long, the weekend was crazy.

I tested my living room fan and the one in the master bedroom. It looks like they’re pulling about 25-30 on low and 75-80 on high.

The one in the kitchen runs about 170 but that includes the light. - the controller is down right now it’s either on ‘as is’ or off.

I have two smaller bedroom fans and one in the game room which I didn’t check for this, but assuming they’re in the same ballpark.

individually, each one isn’t a big deal, but I’d had a bad habit of just leaving them all on - so it did add up. I treat them like lights now - on if they’re needed but off when you leave the room and I think that’s made a difference over the year. maybe $150 savings over a year, but part of the bigger picture of making small changes that add up to make the difference.

@Becky wow, that is quite the difference in fan wattage… I have 4 in my house, all replaced last year… when I bought my home, they had some cheap flush mount ceiling fans, fans were too close to the ceiling, you never felt any air movement even on high… so I changed them all out for 52in Hunter-branded ceiling fans on a 4in drop shaft… now I feel air no matter what speed… my est 13watts is fan on high without lights (separately switched)… after hearing your numbers, makes me like my fans even more than I already did… thanks for indulging my curiosity…

Wow… mine are, i think it’s the home depot brand,… hampton bay. I’m sure the living room is 60 in., the other one may be, or maybe 52. The ones in the other bedrooms are smaller. I’ll check them as soon as I get the chance. That really is a significant difference.

it certainly highlights the importance of replacing devices with energy efficiency in mind!

i have found the energy star rating to be a useful general guideline, but I’ve done a lot of testing, first with a kill-a-watt device, then with Sense and have found the rating to be like … i suppose like the mileage rating on cars, “the best possible in a controlled environment” and not what you’re going to actually get in the wild.

like when a light bulb says it cose $2 a year to run, but that’s if it’s only on three hours a day, etc.

I look for the energy star rating, but then compare numbers from there. I think that’s the best you can do.