Desperate for some help on Connecting (Pics and Video)

Hey guys, THANK YOU for taking the time to read this. I recently bought a Sense Flex so have 2 dual connectors as I was planning to go the solar route. My energy usage is not too heavy at roughly 30-50kwh per day on average.

The set-up I have is UG cables coming in from the utility and into my basement to a “MAIN” shut-off. At the main I have 6 wires coming in. 4 @ 120v and 2 neutrals. Those 6 wires go into another panel which then gets connected to sub-breakers down the line.

I initially connects the clamps to the 4 120v wires facing upwards but I got an error saying there was something negative being read (don’t remember the exact message). Nonetheless, I’m looking for some support how I can correctly connect to the 4 120v cables to get accurate readings.

I’m also attaching what the box under the meter has wires wise but I don’t think that will be helpful since it just seems to be some wires to help the meter run rather than TRUE SUPPLY wires I can connect to.

Thanks again for reading this and any help! 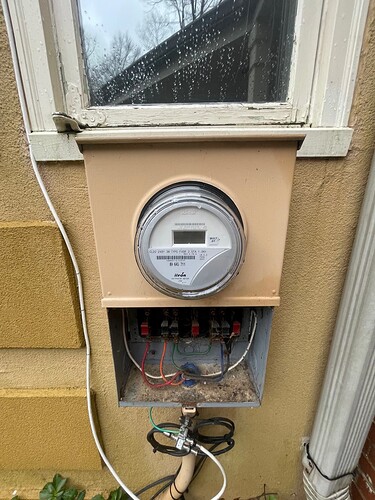 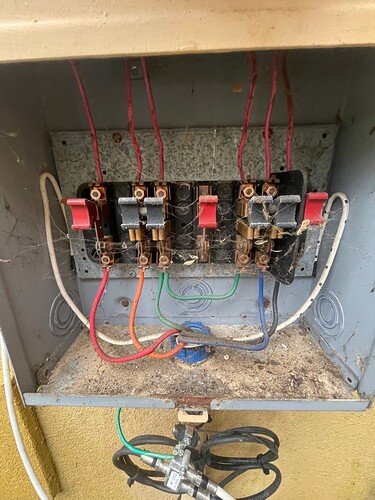 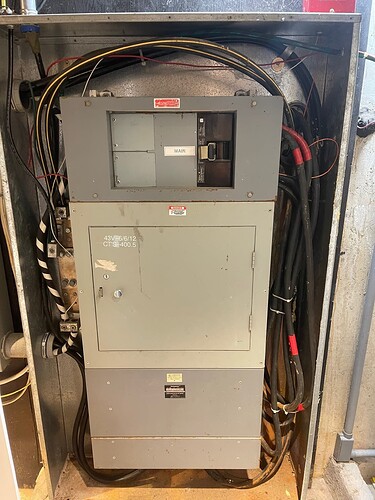 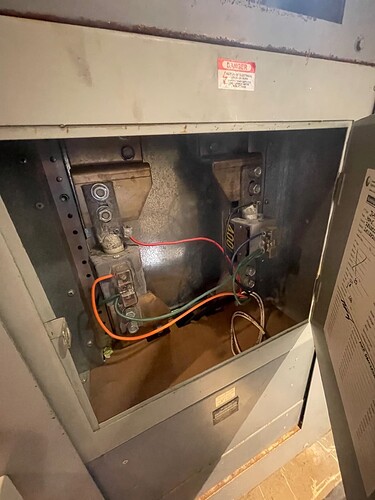 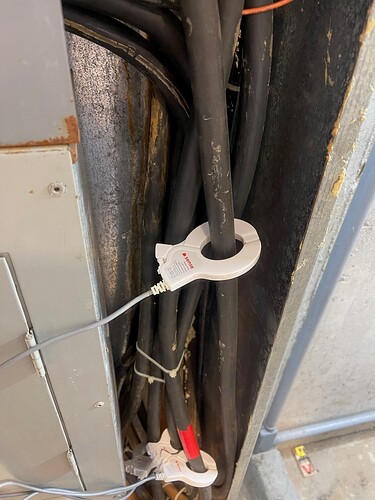 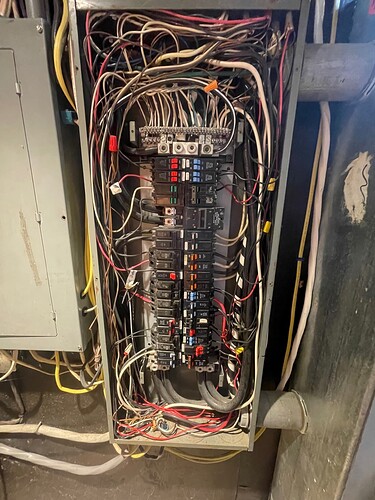 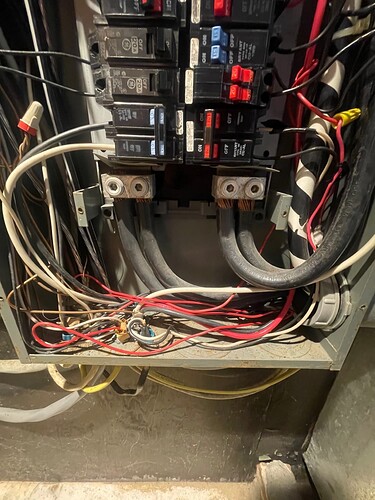 My quick is assessment is that you are thinking correctly, putting the CTs on the pre-main breaker / shutoff pair, leaving the other CTs unconnected until you add the solar and know where your backed is going to be.

Thanks Kevin. Here are some responses:

-I believe the UG wires enter the meter box from somewhere else. As you pointed out the wires I have a picture of under the meter are incredibly small so I do not think those are the supply wires.

-The mains that enter the main disconnect/shut off box is tough to tell where they originate from. All the panel boxes are mounted on a wood frame that have about an inch of space from the back and covers on the side so I can’t tell where they are coming from (since when I check the meter box I don’t see the chunky wires there either). Here’s a picture of where I can see 1 set coming from (the second set comes in the same way but is lower) 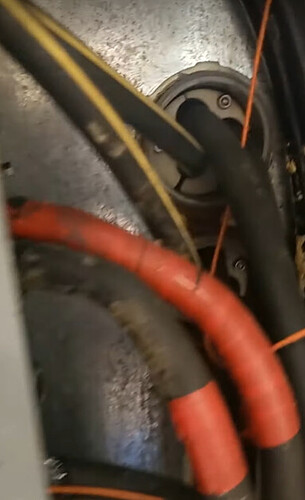 -You are correct, there’s a main disconnect that goes to a main breaker panel, this panel then feeds at least 1 sub-panel. I also have two additional panels that I’m not completely clear if it feeds those but would have to assume so - further, 1 out of those 2 additional is hooked up to a generator but I don’t think that’s relevant at the moment (that panel has an auto xfer switch linked to it) but let me know and I can share a picture of that box as well.

Unfortunately, I can’t fit both of the wires in one CT

; I initially put 1 CT on reach of the 4 wires but that’s what gave me the error of saying there was a negative reading. Any ideas on what kind of set-up I even have? (2phase/3phase?) 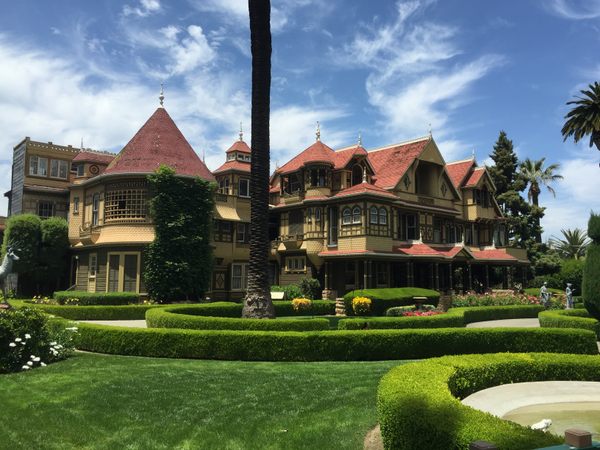 A peculiar mansion built by the troubled heir to the Winchester gun fortune.

Haha, yes, def. feels like a mystery house to a certain extent. I’ve tried two electricians but the competency has been questionable.

I’ll try with the two CTs and report back for now.

Do you only have 1 meter or is that a 2nd meter for net-metering for solar ?

I think you have 400amp service with a 20amp side load (meter in photo) then in breaker box 1… is a 400 / 42 slot panel with no main … fed from the 2 double lugs. Then you have another full panel being feed from it as a sub panel. If I’m correct, if you can put one CT over the 2 large wires on the in the double lug on the right bottom of breaker box 1 and the other CT over the other set. Then tell sense it’s a 200amp layout.

Then in the panel under the meter in the photo… you’ll have to use a meter to double check ( 2 wires on the same leg will measure 0, opposite legs will measure 240v -not measuring ground) so the 2 that are on the same leg put in the next CT and the other 2 wires from the other leg in the other. Then when setting up, let sense know what that goes to… such as solar/ gen/ or tell it it’s a 400 amp service if that’s feeding something else.

Trying to run the 4 CT’s for the feed only will probably error out since it’s 2 sets of parallel wires and I don’t think sense has that type of a layout in its config.

This may help/confirm what we already know but when I check the volt meter against the two wires going into the double lug they read out 0 (i.e. they are not two separate 120s coming in but must have the same main) To that end, I think if I can figure out where they split from and hook a CT to the single that can work but I think the only way that may be possible is by taking out the meter box / calling the meter company or if there’s a way I can get both wires around the CT.

I think instead of going with one red and one with the red stripe, I should go with under the main fuse box going around one wire on one dual lug and the other wire in hte second dual lug - that way I know I’ve def. got the 240 devices captures as well.

These are 400amp lugs. The 10 or 12 AWG orange, red, black and blue wire are connecting that meter. It’s a centron Itron “CL-20” means it’s rated for class 20 rated at 20amps@240v (3-wire). Defiantly not feeding your panels, it’s also after your main. So that a for a different device… normally that would be net metering or your power company is charging different amount for a different device … such as a water pump, sump pump, or such.

I would’ve thought if I used the two sets it would work but that’s when I get the error on set-up saying it’s a neg. reading.

If there was a way to make the CT clamps larger, I think I wouldn’t have this problem. 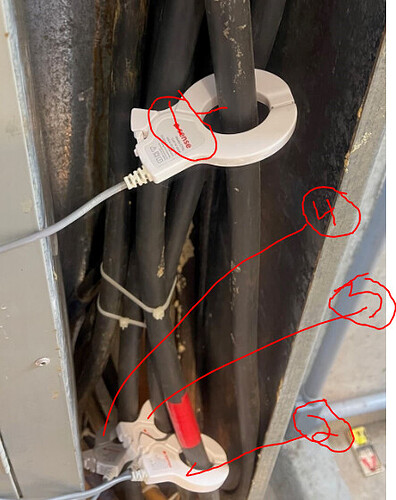 @stalliontrail , In my mind, if you really have dual feeds to the main breaker / shutoff, then you should probably start looking to see if the split at the bottom goes to two different panels. Sense supports that configuration via a 2x200A setup.

Good afternoon! v32 (iOS/Android) expands compatibility for the Sense monitor. You can now integrate Sense with your standby generator or, for users with split-service 400A systems, track consumption from both panels from one account. These new features utilize the monitor’s middle port. We’ve also digitized our installation guides, and added two new guides specific to these features. Digital guides can be accessed via sense.com/guides. You can set up these new features in two ways: New use…

You can also try on the dual parallel incoming supply lines and the 2x200A setup, but won’t get full functionality.

In my books, time to look for a split into two separate panels at the bottom.

I see your though process, but currently there isnt a configuration by sense engineers that tells the CTs that 1 + 3 are “Line 1” and CTs 2 + 4 is “Line 2”. What sense is calling “400 amp split service” have parallel panels. That would come in similar to one meter then the meter would have 4 lines… 2 going to panel 1 and 2 going to panel 2. Like this 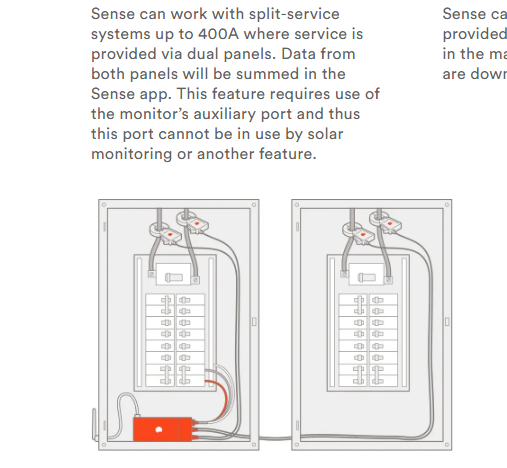 Yours panel has all 4 going to panel 1 (400amps) … AKA “parallel feed” then going to another panel like a sub-panel. You could try to tell sense that your have the 400 split, but I would think it will prompt you saying your have an installation error because its seeing CT1 and CT3 reading the same things… and thinking you accidently put CT1 and CT3 on the same wire. Not sure if someone from sense support can get it to ignore that warning or not.

I would flip the main off and see if you can get a set of those CTs around the bus bars right here. either right above or right below 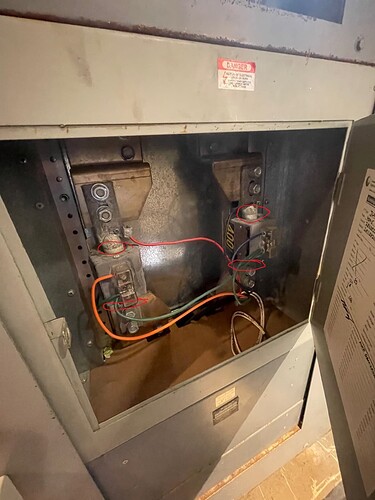 I think we may be in business!! I didn’t flip the main off because I was too paranoid about resetting all my water softening and filtration devices so maybe I’ll do it at noon sharp tomorrow to avoid that or do you think it’s okay if the CTs aren’t 100% closed? 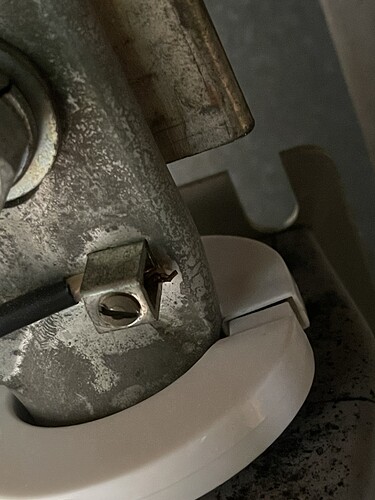 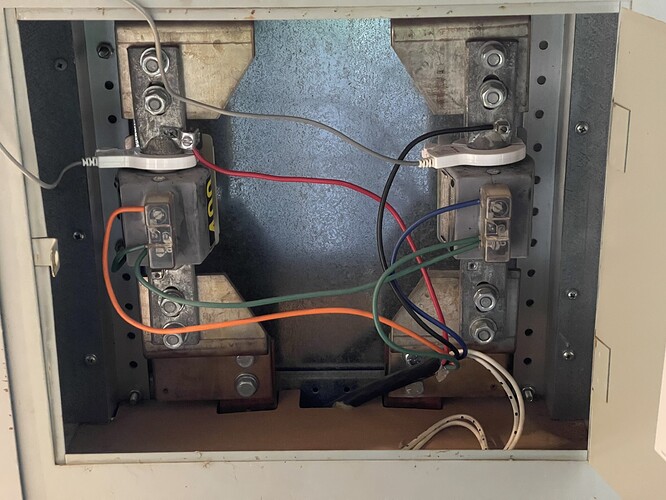 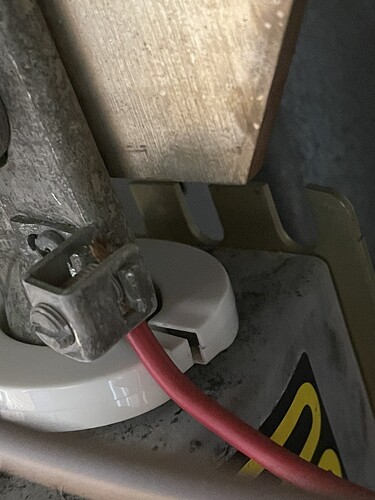 The CTs really need to be closed completely to avoid flux leakage and to avoid picking up stray magnetics. I can’t tell the exact shape of your CTs from the the photos but Sense has started offering more oblong CTs that might fit your bus bar better. You might want to contact support@sense.com for more help.

You can see the shape here, but those are the Flex Sensors. The main sensors are specially calibrated, so not sure how / whether Sense offers the oblong ones for the mains. 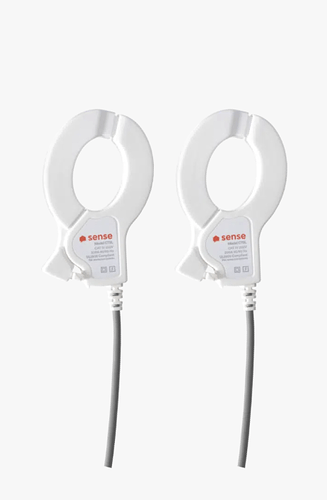 Both of the ones that came with my set are oblong.

Ahhh well - I say go for it and realize the numbers might be a little low. And when you do your “scheduled off”, try to wriggle them closed a little bit more. I have my fingers crossed ! Thanks @ccook for your knowledge of house entry wiring.

ps: Mine was pretty simple though I had to open up the pre-meter entry box to do it, and I had to use 200A calibrated CTs on a 320A service. 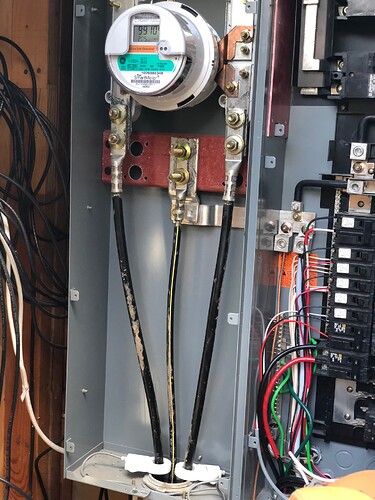 Did you have to get the electric company to come out to open the box?

Also, When you say 200a calibrated CTs on a 320A service what exactly does that result in? I’d imagine that if you are pulling 320amps at once then your CT/Sense may get damaged or give inaccurate/false readings? Other than that, I’d assume there’s no impact, right?

I did not have my utility open the box - my electrician opened and closed up, reconnecting the seal the utility uses (or close enough).

From what I have heard from Sense, there is no risk of damage if I were drawing the full 320A. The issue would be clipping (inaccuracy) since the Sense measuring calibration is for a max of 200A (or really 100A per leg), though they have also done some guard banding, probably up to 110A on each.

My sense meter is a little bit older and my CTs are bigger for the mains and the solar are the size of what comes with them now which I think are 1" CTs.

I think your main box is rated at 600amps then someone put the 400amp bars in it. The main box looks like something I would see in a commercial setting that is not 3 phase… Same for the panel… But then the 12/2 and 14/2 romex is what you would see in a newer home. Out of curiosity is this in the US?

Im not sure if the CTs have to be latched or not… but those are some massive bus bars. I want to say I have seen people having issues with them not being closed in the past during the initial setup, but it looks like you made it past that. My guess is that this will work and read everything except part of the circuit above the CTs small red wire and small black wire… That is a parallel connection to the 20amp meter.

@ccook,
Thanks for all the explanations. You helped me understand why my house has a 400A service, but the meter is a 320A.