The KP125 did not loose connection at 5 days, the only thing I did differently was associate the plug with a different KASA account/ email. The 3 times that it issued the 192.168.0.1 was right after contact with 54.166.93.92:443 (TCP) which is Amazon Technologies Inc. , here is the Arin search results

I just booted up my new raspberry Pi yesterday that I haven’t loaded anything on it yet. But I’m going to add this kp125 back to my house and if it starts dropping again Ill put wireshark or tshark on my Pi if I need to. I mainly got the raspberry Pi after seeing @kevin1 home assistant build with his thermostats screenshots.

Interesting. FWIW, I have cloud control disabled on all my plugs, and further have a firewall rule blocking them from accessing the internet. I’ve never had any issue with any of my plugs (4x HS300, 6x KP115).

Do you just use the sense app to control them?

The Kasa app also has the capability of doing “local only” control of the smart plugs, but that I think is limited to manual ons/offs without any scheduling / timer / away functions that require the cloud.

Do you just use the sense app to control them?

I have a handful enabled for control, using either Sense or Hubitat. The rest are always on, used solely for Sense power monitoring.

A few of my Smart plugs stopped reporting in Sense. They were still controllable w/ Kasa app, Alexa and still showed accurate power usage in Kasa app.
Power cycling Sense monitor and main router (DHCP server) did not fix issue. Power cycling router/ap that Sense connects to did fix issue.
It appears the router/ap the plugs use played no role as there was a mix of reporting and non reporting plugs connected to each, including the one Sense is connected to.

So I had a power outage and Internet outage at the same time today my Tesla power wall stepped in and there was no loss of power, But during the outage I moved my sense over to my T-Mobile wireless home Internet and since I did that none of my Kasa plugs are not showing up in Sense. Does sense and smart plugs need to be on same wifi?

Short answer: Yes. Same WiFi SSiD required. Has to be on same “subnet”.

Long answer: There are ways around that, but you probably don’t want to go there.

Got the sense cut back over to the original network and plugs are starting to come back. Thank you!

Over the past 2 weeks I have had several of the KP-115 simply stop communicating with the WiFi. Not sure this is same issue as the devices are showing local only in the KASA app. This is really the first time I’ve had issues like this on several units.

One device stopped twice in the last 10 days, but as it was in attic with this heat, I thought this was perhaps an issue. Same with one on my outdoor pool motor.

Then one in my garage stopped. Yet another on my garage door opener continued to work. Still might be heat related.

Then the unit on the washer stopped. That should not be heat related.

Do your devices show in the KASA app when they disappear from Sense?

I’m wondering if heat or the fact I’ve had these about a year (age) are playing a factor?

They all have come back after a reboot (kill the breaker to the circuit for 10 seconds).

I personally haven’t seen many issues with KP115s but when I did see issues with HS110s/HS300s, 90% of the time, the issue did not affect the Kasa app, but occasionally did. In the Kasa app, the issue would manifest itself as a lockup when I tried to push down for detailed power info. My Kasa’s have been pretty reliable for the past few months with only short dropouts along the way. 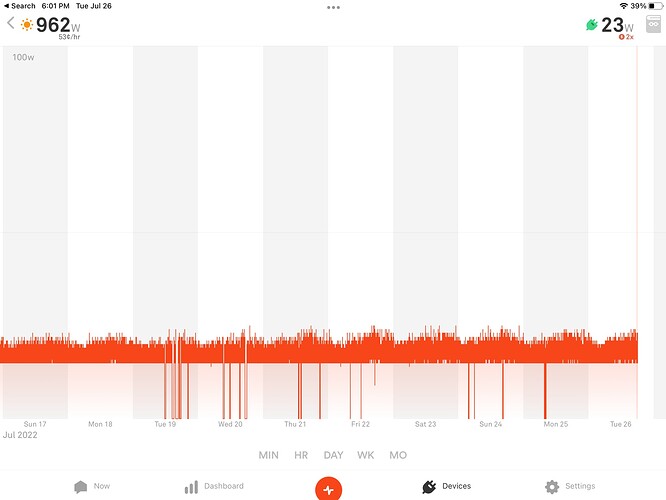 How hot is hot for these potentially heat related issues ?

Mid 90’s in garage during the day.

Probably around 105-110F in attic where a plug is. Not in hottest part of attic where exhaust fan and temp sensors are.

Pool motor box enclosure is not hit by direct sunlight, but enclosed. I can’t see it getting over 100F there.

Washing Machine in laundry clearly no more than 80F.

A year ago I saw all the posts about the KASA units losing their WiFi connection and scratched my head as none of mine ever had that issue.

Fast forward 1 year and I average 1 to 5 falling offline daily. Some in hot areas such as garage and attic. Others in climate control living areas.

Even after a momentary power outage yesterday reset them all, later in the day 2 were offline and we’re reset only to find 5 offline today.

And yes, I am stating they are also offline in the KASA app. Commercial Mesh WiFi system and the ones falling off line are no more than 20-25 feet from an AP.

I am now just convinced that these units are cheaply made that they just do not last long, which is why the often sale them at $8 to $12.

A more reliable single unit is needed for Sense.

Sorry to dig up an old thread but it seems this topic will reach a number of relevant people.

Thinking of buying a couple of KP115s, but wary of yet more temperamental gadgets that require my time to babysit.

A couple of questions:

Nothing is completely failsafe, but the Kasa plugs seem better than the Wemos when it comes avoiding refrigeration issues, mainly because the Kasa plugs default to On after a power outage. From what I have seen, the Wemos don’t. The chart at the top of the post attempts to highlight issues that affect the Sense integration, but those are separate from the underlying operation of the plugs.

They seem to be old tech, possibly verging on obsolete. Any sign that Sense will pair up with something better or its replacement?

How to use Sense with Wemo and Kasa smart plugs

How does their accuracy as energy meters compare to Sense itself? Does Sense use the power values reported by the KP115 itself, or just use it as a trigger or appliance identifier, and Sense does the calculations?

Which dimension of accuracy. The Kasa smartplugs are roughly accurate down to about 1W, but are only sampled by Sense every 2 seconds. And yes, Sense uses the actual measurement from the smart plug. Worthwhile reading this:

Thinking of buying a couple of KP115s, but wary of yet more temperamental gadgets that require my time to babysit.

I have 4 HS-300s and 8 KP-115s, most of which have been in place for almost two years. They have not needed babysitting in my experience.

I will note that some people reported experienced issues with the plugs going off line (disappearing from Sense) about a year and a half ago, but I think this was an uncommon experience, and I haven’t noted any recent reports regarding this. Possibly these edge cases were addressed by one of the handful of firmware updates TP-Link did about a year ago. Make sure your firmware is up to date when you get your plugs.

Which dimension of accuracy.

Thank you for your detailed response

I guess by accuracy I mean “closeness to reality” not “precision”. In other words, if a device actually consumes 100 W as measured by Sense power meter (let’s assume Sense is the source of truth), will the Kasas report 100 W or something different? 2% variation is fine, 10% is not.

Here in Aus it seems the 125 is not yet available.

@watersmt , I’m pretty sure the TP-Link Kasa devices are very close to the Sense device detections where applicable, purely because the chips doing the measurement inside the Kasa devices are essentially metering chips, so accurate within a Watt or so. I say “where applicable” because Sense native detections rely (mostly) on on and off transitions to determine power usage, so the smart plug might see usage that Sense does not - examples:

You have to think of the smart plug as the source of truth for an individual device, if you are using a smart plug. That’s why Sense gives you the option of “merging/hiding” native detections via a “What’s connected to this ?” option in the Manage part of the Settings for smart plugs.

I have not had a KASA unit fail in about 18 months of usage with several dozen devices. You are correct, I’d be mad that a fridge or freezer spoiled everything if the unit went out. I have not seen that and as @kevin1 noted, they come back from outage in the on state.

I have them falling off line more and more as time has gone on which makes me wonder if age is an issue. While others were complaining a year + ago when mine were solid, I’ve had quit a few dropping offline at random this year.

There is a KASA notification in their app you can use when power goes off (or on). It does not work at all in my testing. I probably should open a ticket with KASA, but never have.

You could also setup Sense to alert you continually if something is off for x minutes and stagger them (like 5 min, them 10, then 15, then 30, then 45, then 60 min, the 2 hours, 3 hours etc). I have this for my fridges and freezers. Problem is, it will not email and/or text you so easy to overlook.

Their schedule system does work well in the app though.