Number of time of use rates

How many time of use rate items are allowed? I have 10 set currently because my utility has that many based differences between summer and winter. Trying to add the 11th looks like app won’t allow.

I know that Sense had to pick a limit, but I can’t remember what that # of Rate Zones limit was. They had asked about some of the analysis I had done here, related to the max number of TOU rates, for the largest 25 utilities in the US.

OK - starting to analyze all the active, residential plans in the entire database, since I have unpacked the database a bit more. I’m trying to take a look at all the plans, but focusing in on the utilities with the most plans for discussion here: Top 25 Utilities - Distribution of ToU periods/time domains Here’s a view of the top 25 utility and their distribution of rate plans by period. Zero periods means the rate plan relies on something other than time to calculate rates. Many utilities h…

Frequently Asked Questions: Time of Use

What information do I need in order to set-up Time of Use?You should be able to find these details on your rate schedule, typically available on your utilities’ website. You will need: • Cost per...

@karinann , one possible workaround is to roll any always adjacent Rate Zones that have rates that are close, into a single rate zone. Which utility and rate plan are you using ? Would be interesting take a look.

My electric utility is Duke Energy.

They have different time of use periods and consequently different rates for
summer and winter.

Thinking about this, it may be possible to develop a Venn diagram to see if
there might be overlapping zones.

Given the two time periods (ie: Summer and Winter) maybe it could be
possible to make a separate file for

Each then depending on the date do the switch.

@karinann, can you give me additional pointer to the exact rate plan. I’m trying to find it on either the Duke website or in this database of all the electric plans in the US.

I found this Duke TOU plan, but it has 10 Rate Zone, so less than you are dealing with.

Time of Rate - How it Works - Duke Energy

Search for “Duke Energy Residential Time of Use”

That is true but you have to set different rate plans for weekdays versus
weekends They are different.

Weekend rate plan has same Off Peak rate as weekdays but the weekend OnPeak
rate does not take effect.

The Off Peak rate for weekends is for the entire day.

So you have to set separate plans for weekdays and weekends. The time
periods are different.

You’re right,
The weekend eats up 2 additional Rate Zones (summer and non-summer), plus the 12PM split of Off-Peak for non-summer adds another required Rate

If you could bundle the separate Winter and Summer options and allow ten
rate zones per bundle that would solve the issue.

The entire bundle could be switched in based on the activation date.

I’m on Duke Energy TOU. You don’t need to specify any off-peak times, only shoulder & on-peak times. This only accounts for 3 time periods for each season (6 total).

Here are my rates in the app; 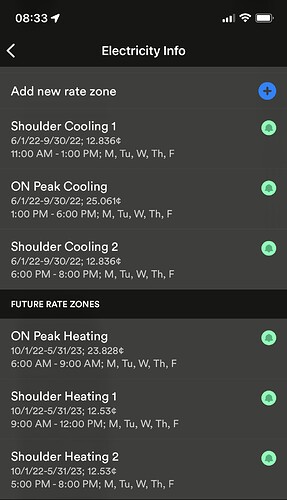 So how does Sense handle the Off Peak rate in calculating the Bill?

Do you have to enter an Off Peak rate in the default value above the TOU
rates in app?

If Sense doesn’t see an over riding rate in the TOU settings does it default
the standard rate?

What about the “Super Off Peak” rates that Duke has?

@karinann, think this is what @Edison517 Edison is referring to:

As an alternative to creating multiple Rate Zones for a single Time of Use rate: it is possible to set your Default Electricity Cost to stand in for it, as the Default Cost applies to any gaps not covered by your Rate Zones. If you don’t create, for example, Rate Zones for the two Super Off Peak periods above, the Default Cost will automatically fill in those periods. However, while this may make rate entry easier, it does have some drawbacks:

That probably won’t work for Winter and Summer both (base rate different), but could buy you back 2-3 Rate Zones for other uses.

Doing the Summer/Winter swap like I suggested??? And Keep everything
consistent.

One could do the swap manually. Just sit down and re-enter all of the data
when the time period approaches.

One issue I’ve been overlooking, there is an exception to OnPeak rates. All
of the Holidays

Have All Day Off peak rates over riding the scheduled On Peak rates.

That mean you have to enter separate rates for all of the Holidays.

I know that Sense decided steer clear of the holiday problem back when they were adding TOU. It’s a real challenge because many holiday dates move around in a year, even for fixed dates because location in the week affects the auxiliary vacation days adjacent. I don’t think the current rate zone model was designed to really accommodate. My utility, PG&E, has moved away from separate weekend/holiday rate zones and other working hour fine tuning with most TOU plans, because solar is becoming the biggest pricing complication in California (the duck back problem).

I’m speculating that Sense will need to do a respin of modeling utility rates as they work with Landis and Gyr on meters with Sense technology embedded within.

At the time, the number of Rate Zones went as high as 9, so 10 might be the limit

I currently have transposed my SDG&E TOU’s into a excel Spreadsheet, then created 15 Rate zones, so perhaps the limit of 10 has been increased.

My question is, can I save/export these settings to my local PC, so that if I ever had to do a factory reset on my Sense Device?, I don’t have to re-create all 15 from scratch by importing a CSV or other file format if needed?

Yes, download to a CSV File, copy rows, edit as needed to reflect rates and times, etc, then import CSV file as needed when changes to rates or TOU hours change.