So my utility has a really strange tiered usage pricing in the winter. I’m using home assistant to heavily track my actual rate and solar savings.

I’ve used home assistant to calculate the “real rate” I end up getting charged per kWh in a month. I can plug this into sense for the billing period using the ToU for the period. The consumption cost will match the bill.

The only problem is since solar will reduce the highest tier - the rate I export/reduce my bill is different from the average rate over the period.

In the screenshot from home assistant below I calculate:

Oppd current rate: the rate I am currently being charged in the period
Oppd real rate: the net total/kWh imported
Oppd production rate: The solar savings/kWh produced in the cycle. 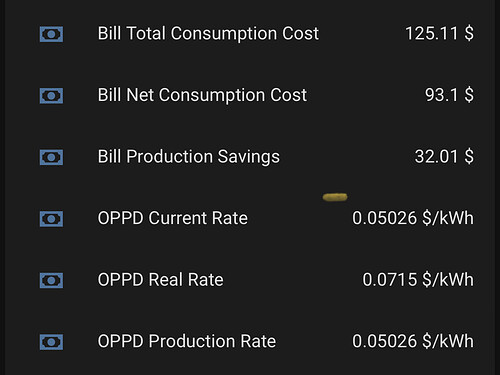 So i can use the “real rate” and plug it into sense for a ToU rate, and get it to match my bill. However the solar production ends up using that same rate, which causes the cost to be about $20 higher.

Obviously I can track all of this outside sense to get an accurate representation of my bill/costs. But I like using sense’s app to quickly look over everything.

Adding a Solar rate to ToU would be helpful.

This is a teer billing system, for whatever reason sense has never an interface that includes it.

Yeah I would love for them to have direct support for a tiered system, but I doubt that will happen. Of course implementing a solar rate for ToU is also a long shot.

I have been using the ToU to meet most of my needs by calculating the “real” or average rate over the period myself. This produces the correct net values, but over estimates solar value as a result.

I have a similar billing layout. And they adverse around the same rates you are posting. I have 2 tiers all year long then 3 in Dec-Feb. however they have a customer fee + a meter fee that is $15.62… then they have a bunch of riders that attach to each tier, so on my lowest tier they advertise 8.7¢ per kWh but with all the riders
, it the cheapest tier comes to 15.2¢.

My power company (AEP) just changes me for net usage… “from grid- in the app”. I can’t really control the customer charge/ meter fee (I know I can put it in HA) but with 2 tier I can look at my from grid amount and calculate that in my head, ….… where as the Time Of Use billing type make it way too complicated to try to calculate. Some of the guys in here have a +30¢ KWh rate increase at 6pm then a different rate after 1am, then different on weekends. Many of them have solar hybrid inverters so they can run off battery power during the higher TOU rates.