I’m happy to announce the release of v42 to iOS, Android, and Web.

We’ve introduced localization features to the app where the app will be rendered in your chosen language based on your phone’s language setting. We’re rolling out support now for French and Spanish. This will also affect your Monthly Email Report and other app-related emails.

You can now easily see your home’s power flow via a toggle on the Now screen.

We’ve also added the ability to trigger a self-consumption notification based on a % of your choosing. 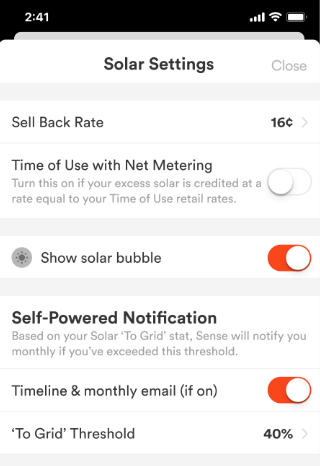 Finally, the solar screen itself has been tweaked to highlight key metrics of your production. 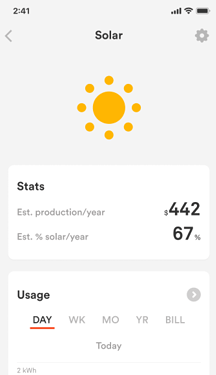 You’ve long been able to ‘lock’ control of your smart devices, preventing you from accidentally turning off (or on) a smart plug. We’ve augmented this feature to still show the control button on your Devices screen, with a small lock indicating that control is disabled. This allows you to still easily see the state of the device, and that it’s a smart device.

Thank you for implementing some foreign languages. I think you did a great job! I spot checked the Spanish translation several places and the translated wording was both accurate and fluid. There are also far fewer remaining English words than I expected for a complex application such as Sense. I know that it is difficult for your programmers to find all the text, but they got most of it!

They even translated things I didn’t expect, like the names of a couple devices. Here is a screen capture of the device tile for Fridge. Note how the device name was conveniently changed to Refrigerador. Also visible in this screen capture is the new lock symbol on the smart plug. 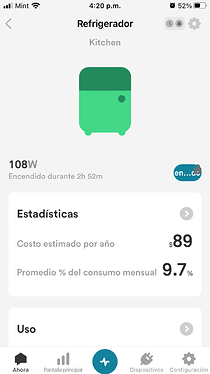 About that small oval where the lock symbol appears. In the English app, that oval has either the word “on” or “off”, which correctly become “encendido” and “apagado” in Spanish. Unfortunately, those translated words are far too large to fit in the small oval. At least they are gracefully squeezed to fit by the use of ellipsis. On this screen, the oval could be made larger so squeezing wouldn’t be needed. However, the Device page would get kind of cramped with larger ovals. Maybe use the universal symbols line “|” for “on” and circle “◯” for “off” instead?

Thanks again for the update!

I’d love to see more frequent updates to the app… It seems like a long time since we’ve seen any improvements/changes… Maybe I haven’t paid close enough attention, or maybe the changes were back-end changes and bug fixes…

I’d love to see more features that support NEM management (I think I posted a feature request that would allow solar NEM users to set their “True Up” date, and track and manage production and usage based on the true-up date…

The new stats at the top of the Solar page are unhelpful for me because of net metering — they are essentially both wrong. And I use the information below those stats daily, so now I have to scroll down every time I look at the page. Can you add an option to disable it, or to show net annual energy cost and net solar percentage instead? Thanks!

I am not sure I would characterize them as completely unhelpful…but yeah, they certainly aren’t as meaningful as it would be if Sense would record your True-Up date, and reflect your NEM totals and subtotals based on the true-up date… Almost no one is going to have a True-Up date of January 1st…

I am a quite satisfied 2 year Sense user and a regular follower of this forum. But this is my first post, and I wish it were not negative.

I really do not like the auto sorting of devices by magnitude of power draw in the Devices tab that was introduced with this update, versus the previous alphabetical listing. Sometimes my screen has multiple devices with near identical loads being re-arranged constantly, making it cumbersome to find and select a particular device.

I will post something in the wish list asking for this be made a toggle feature in setup, allowing the user to choose if they wish to see their devices sorted by magnitude, and therefore dynamic, or alphabetical, and therefore relatively fixed.

I have 30 plus smart plugs and another 15 native detections, so possibly my device list is longer and more dynamic than others. I was sure hoping someone else would make this post. Please like it in the wish list category if you agree.