Why does it constantly rename my TV?

Since the last update, it renamed my “TV” in the app to “TV/Monitor”. Even if I change the name back to “TV” and save it, it will revert to “TV/Monitor” soon after. (Android sense app & web browser app)

In the past, the name “TV” would stick just fine. Bug? 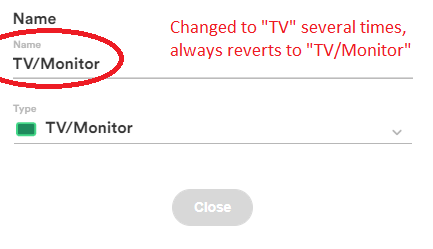 Its on a Kasa outlet where it is also only named “TV”.

Inside the sense app it was named TV for almost a year, but something happened in the recent update. I renamed it once more now. Let’s see how long it lasts…

I have the exact same issue. In the Kasa app, my plug is named TV2, but no matter what I name it in Sense, it always reverts to TV/Monitor. I also believe this happened with the recent update.

Thanks for confirming that I might not be going insane after all.

Here’s just a quick illustration: The renaming (in app or browser) actually works for the current app session, but as soon as the app is closed and re-opened, we are back to rectangle one. 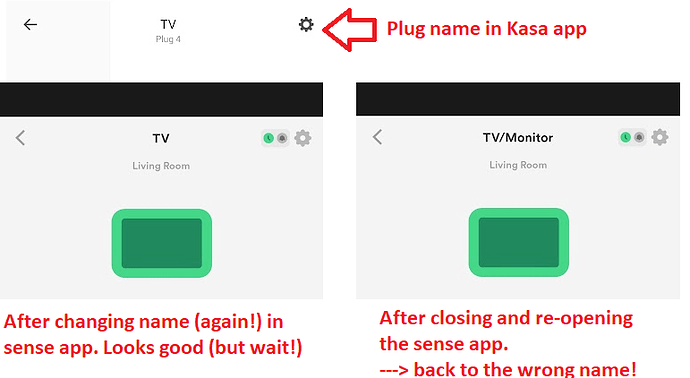 Have you tried listing in my Brand and Model Number? Mine is not on a Smart Plug and was detected by Sense. Have not had an issue with name change.

I’ve had the make always listed. Will add the model number. 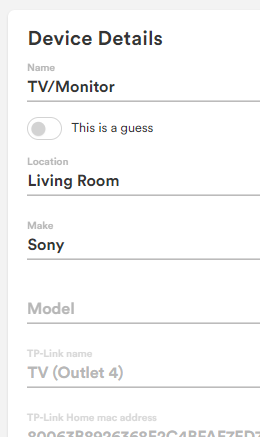 OK, using the web app, I change the name back to “TV” (again!!!) and now also added the model number. A minute later it was again “TV/Monitor”, see picture! 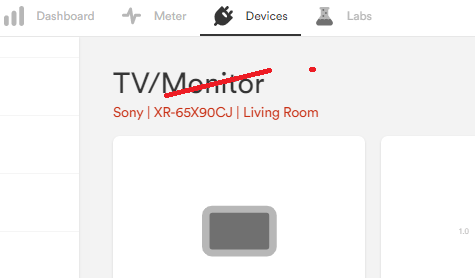 The subject line of this thread is a question: Why does it constantly rename my TV? I’ll hazard a guess at the answer to this question:

When they implemented support for multiple languages in software version 42, it appears that the developers included a lookup table of translations for select common appliances. See my post What's new in v42 (iOS, Android, Web) - #2 by jefflayman for an example with Fridge. Below is the device tile for my TV when I have my mobile device set to Spanish. 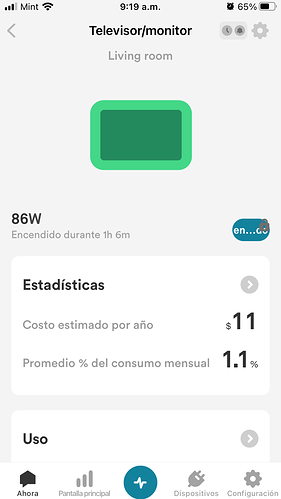 Note that in the device name, TV becomes Televisor in Spanish. On the other hand, the second part Monitor doesn’t change. This is actually expected because the word “monitor” is written in Spanish exactly the same as in English, although the pronunciation of the word does change. This is background information because it was the clue for my hypothesis which follows.

Something must cause the app to access the lookup tables from time to time. When it finishes that, the device ends up being renamed with the round-trip translation, which does not match the original name.

Blaming language support is Interesting idea, especially since the problem coincided with the update. Maybe I should just give up and rename it to something more unique (Telly? Tube? )

It’s interesting. I have a TV that I named ‘Sony TV’ on a smart plug. It was categorized as ‘TV’, but the categorization changed with the last release to ’ TV/Monitor’. So probably related.

I should just give up and rename it to something more unique (Telly? Tube? )

Correct. Any name sticks that is not a word in their list of common appliances.

Of course the correct fix would be that they should not even try to translate any name given by the user (either in sense or in kasa). We can assume that the user knows better! Language settings should only apply to e.g. the “Type” and other built-in and general UI strings.

Hopefully in the next upgrade

Names coming from KASA are, by definition, user chosen and should not be translated. Other names can come from auto identification, or the user. Only the latter should possibly be translated.
I think this is a fundamental oversight they made when they introduced translations. If the theory about the translations is right, and you never switch languages, the name should not change either. If it still does, then there must be some ongoing, pro-active, renaming going on, which would be wasteful, and bad.

@altenbach, I wouldn’t be surprised if Sense views “TV” as the default name, inherited from the former version of the Device Type, even if you deliberately named. Try something slightly different and see if it sticks.

Try something slightly different and see if it

Hmmm. Sense does name defaults with number in them but there is usually a space. TV, TV 2, TV 3, etc.

The name I have in Kasa is indeed TV2, however in Sense I had it named just TV (until the recent software release, that is). Now I have named it 50" TV so that the name will stick.