Do the Flex Sensor net usage from Other or Always On category? Or is it double counting the energy?

After installing my Sense a few months ago I’ve noticed a large Always On category. Most of my big items have been detected, and I’ve put a few smart plugs to monitor the rest (TV’s, monitors, desktops, etc.) I added the Flex Sensors on a breaker that goes to a sub panel when it was installed. I am curious if Sense net’s that usage out of the Always On/Other categories, or is it double counting the energy? Since I installed the Flex Sensors in the beginning, there weren’t any devices discovered yet.

To start with, most devices have both a dynamic / switched and Always On components to them - so it takes a little more digging to understand how to sort out Always On when dealing with devices on Flex Sensors or smartplugs vs. native detections.

As an example, my upstairs furnace on a smartplug uses a constant 8W (Always On) to power the internal control board and the associated thermostat - that device level Always On is even calculated by Sense. When the AC kicks in, the furnace blower turns on, causing the usage to go to 350W. That additional 342W is what I would call a dynamic power component. Sense native detection would only be capable of finding dynamic components part, but not the Always On part, but smartplugs/Flex Sensors see everything.

So when you add a smartplug or Flex Sensor, here’s what happens: 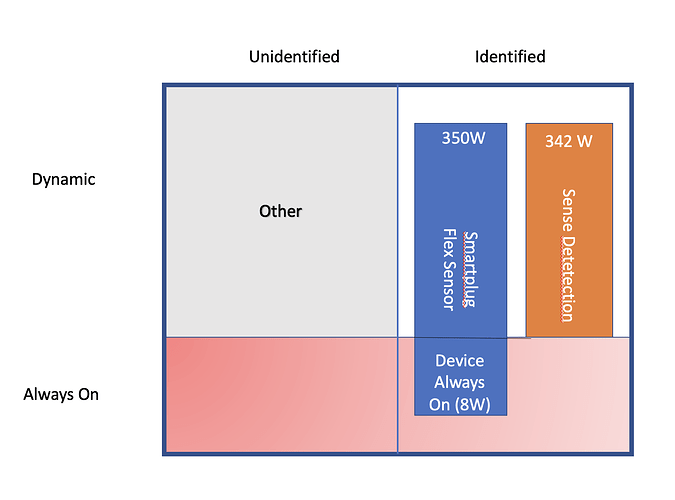 I think I’m following. As I read this breakdown on my Always On, many of the devices that are on Smart plugs are broken down as their share of the Always On. So that Always On share, may double count when those devices are on in the Other category. In this current example, the estimated unknown of 932w is where I’m still having trouble. It’s not showing tied to any device.

I don’t have any major appliances that use that kind of energy that are truly Always on. Let alone ones that haven’t been recognized when they turn on an off (Most major ones have been found)

You are correct about the double counting of the Always On component for those smartplugs and via the whole house Always On, which actually artificially shrinks Other a little. But let’s put that aside and answer your other question.

From what I see in your Always On list, you have a total of 283W + 932W or 1215W of house level Always On right now - that should roughly be the number reflected in the Always On bubble. Of the 1215W, Sense is aware of the sources of 283W, either via the smartplugs or thank to you adding in known devices that have known Always On (like the Google Nest Wifi Points or Sonos Play:3).

There are a number of ways to search for that remaining 932W of house level Always On.

I didn’t see in your posted list all of the very small devices that can add up quickly.

You can probably think of more. Start an EXCEL spreadsheet and make a note of every item plugged in. You will be amazed at how many devices are using power continuously. I have 113 ‘Always On’ devices in my home. Measure, check the Mfg wattage or guess a wattage (like 1 watt) - I think your numbers will add up more quickly than you realize.

I’ll have to try that subtractive method. At least that will give me the circuits that the major loads are coming from.

I definitely have a lot in that 1W range that falls below the screenshot, but nowhere near the amount that would make up 900+ watts. Almost everything I have has been detected, or on a smart switch, or has minimal load.

Just make sure you do it watching the Sense Power Meter, not the Always On bubble. The Always On bubble number uses a statistical calculation on all the data for the past 48 hours, so it changes relatively slowly, and won’t reflect the full affect of flipping the breaker off for 48 hours or so.