I am adding a “True-up” system to my home by adding a second 3.7Kw system on top of my existing 12.1Kw system. These will be operating as two separate inputs to my main panel. Is there a way for my to monitor the production of both systems as well as my usage? I am trying to consider what kind of inaccuracies I would see if I ran the Solar CVs around both sets of wires? Has anyone tried this?

That should work. Just make sure the the current direction (and phase) is the same for each systems’ feed-in through the CT. Otherwise you’ll do subtraction instead of addition. Take a read through this posting:

I have two separate solar PV arrays with separate inverters that get combined in a junction box before being sent to the power company’s Gross Production Meter. Basically, the junction box with two DP breakers is being run backward to function as a combiner. I’ve connected my Sense to the common feed to the junction box so that Sense sees the total solar production. It seems as though this is confusing Sense. I don’t know why it would - current is current. Maybe I’m the one who is confused? An…

That should work. Just make sure the the current direction (and phase) is the same for each systems’ feed-in through the CT.

I am doing this in my installation. It works well for me.

This has been working great for me over the last week. I did run into some problems early on… referring to my attached example, my PV’s resided on two different phases, also one PV was wired from the top of the main panel while the other came in from the bottom. Originally, I had the CT’s on black/black and red/red for the two systems, this was a problem since one of the PV’s would cancel out the other. My solution for this was to put the CT’s on red/black and red/black for the two systems. After a week everything seems to be pretty accurate. 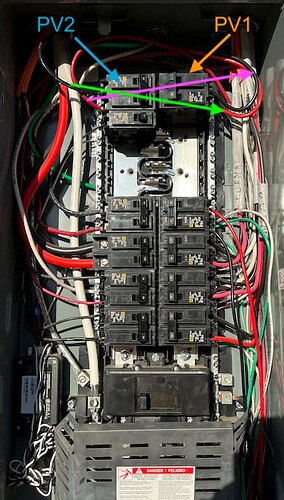 You came up with a beautiful solution.
Remember that this only works on combining pure 240 volt circuits.