Fun: Sense's view of the heating element on my oven blowing itself up

Oops, the heating element in my old oven just spent the last few minutes trying to weld itself in in place. 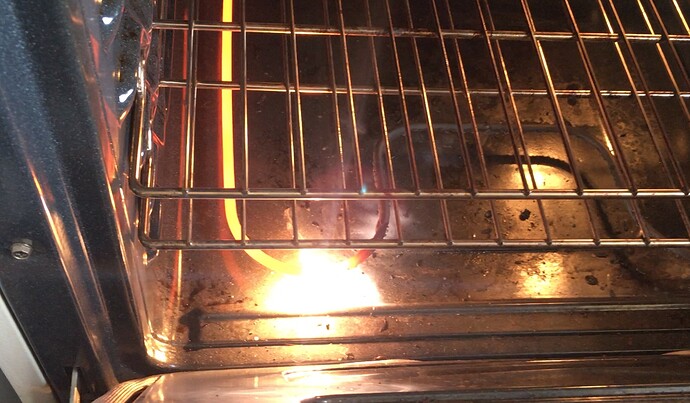 This is the sense usage graph of the oven. The spikes on the left are the normal cycling on / off while the oven is heating up. Then you can see power usage ramps up while the element was melting. The oven controls were off from about 3:40 on, but the element was still drawing power! I flipped the breaker after the peak at 3:48 or so. 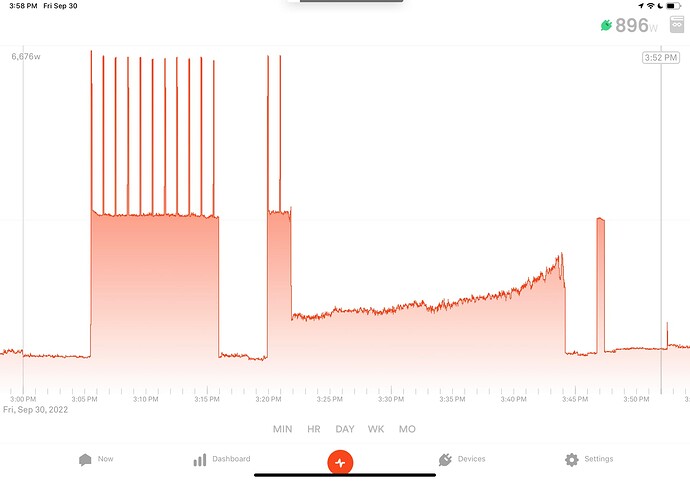 Wait, your oven was turned off, but the heating element was still running? That’s some scary stuff.

I’m not an electrical engineer, but I’d guess that when the oven element’s insulation was breached, the whole oven was energized. This probably created a circuit path around the element control relay. 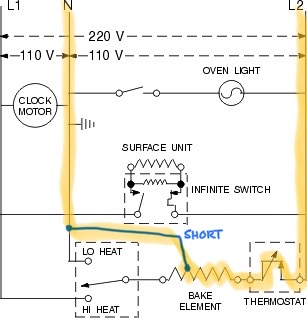 My oven has an old style 3-blade 240V plug, so no ground.
I had a 4-blade grounded 240V plug, then the short would’ve gone from element to ground, not to neutral, but current would still flow.

I don’t think the breaker would’ve ever tripped, because the single 120V leg that was shorted probably can’t carry enough current to trip the 40 A breaker. Even if it could, the oven element is a giant resistor, which limits the current (at least until it melts). The same thing is probably true if there were a fuse on the oven relay.

If I had a ground-fault breaker, that wouldn’t have tripped, because GFCI’s don’t protect against shorts from hot to neutral or ground.

I’m not entirely clear what arc fault breakers do. But if they can detect shorts from hot to neutral or ground, then I guess that would’ve been the only thing. Or some other kinds of protection circuitry built into the oven. (This oven is 25 years old).

after seeing this, the circuit makes sense… (no pun intended) but I would suggest if the 3 blade plug is in a metal box, swap that puppy out, or at a minimum run your own ground wire from the metal outlet case to the case of the range. But either way a GFCI outlet would not have prevented this but it would prevent the potentially energized range/oven case from shocking someone… say touching the sink or fridge and the oven. GFCI can identify L1,L2,&N and if any current is leaked (through you to a legit ground) it would trip. Freaky, thanks for sharing.

Your circuit schematic seems to show the metal frame of the oven as being “grounded” or at least “bonded“ to the neutral. That is, note the little ground symbol tied to the neutral line.(If you have a three pin 240 V plug then your neutral (and oven frame) is not grounded until it gets back to your main panel.)
From the dramatic picture of the shorting heating element, wow! it looks like it is shorting onto the frame of the oven. Not directly to the neutral., But yes indirectly.
Arc fault protection is able to trip on even very very small sparking/arcing problems.
I expect that there was enough sparking involved here To very quickly blow.
The downside to arcing protection here, would be that you would not know what was wrong.

It would trip too quickly, and it might not allow you to even reset it if the oven was turned on.
Therefore I think changing out the receptacle and adding GFCI Circuit breaker protection might be the best.