Love Sense but I am disappointed in Device Detection

A mix of both. Most items are on the Likely list though. I guess there is not much of an option other than waiting a bit more or doing a bit more work to figure out how to pinpoint devices that are otherwise lumped into the “Always On” or the “Other” category.

I try to be understanding, but maybe it was a miscalculation on my part regarding what to expect. Detecting electronics and things of that nature can’t be easy at all, but I think I was expecting more. The system is definitely helpful but being seemingly unable to manually identify devices is a bit of a letdown, especially if so many items would be less likely discovered.

Is there an official list anywhere of Likely and Unlikely device types when it comes to detection?

It would be interesting to hear the items on the Likely list that Sense hasn’t detected yet.

Sense doesn’t publish a Likely / Unlikely list, partially because it changes over time and partially I’m guessing because they don’t want to paint a big bullseye on their weaknesses especially if they one day hope to improve with something like progressive detection.

One bit of explanation - Sense made an early decision that they wanted to do immediate detection, where the the bubble pops up within a second or two of the device turning on. That decision limited their detection to devices that have a very clear, and distinct half second on and off transition. Unfortunately many devices in the Unlikely category do not have clear single on/off transitions. You suggest that electronics might be hard - quite honestly, with the immediate detection constraint, it’s impossible. My 2c is that smart plugs are a good addition for large usage electronics and electrically controlled motors, if you want to trac their usage. The Kasa integration is pretty good and the KP115 plugs can be found fairly cheaply.

This is actually very helpful. I am generally ok with making use of other smart devices. Lately however I have been reevaluating how many of them I really want to deal with. I have gone through and planned out how I want my home to function as far as connected electronics go and one of the main items I was looking to get from the sense is a reliable map of what appliances are using how much power since they are generally the power hungry ones, but unfortunately they are the exact items that do not show up with the sense, so I have had to make adjustments. Not the end of the world, but still a little dissapointing.

For smart devices, I have mostly shifted to using z-wave or zigbee switches so I can cut down on wifi enabled items so I might look for some plugs in that category and see if I can get the power monitoring to play nicely.

My 2c,
You might prefer Zigbee, but I found that Sense plus 1-2 Traveller Kasa KP115s were perfect for doing what you describe - assessing power usage of most of the appliances and consumer electronics devices in my house. You can learn a lot from putting each device on a KP115 for 48 hours. 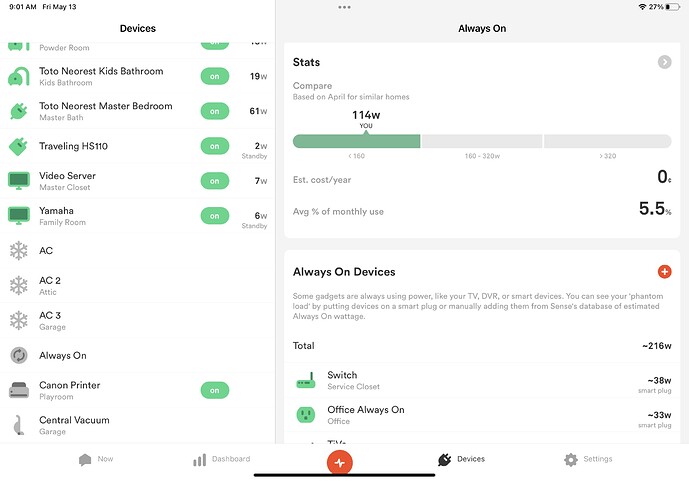 Wondering if the Sense team has looked into a Hub with wireless sensors that be used on devices and subpanels. Seems like it would solve much of what has been asked about device fidelity and multi Sense monitors around large homes.

This makes a lot of sense. Might be worth a try. Are you getting these readings through an integration or is it simply from using the Kasa KP115? It might be a silly question, but I figure if I could use the plug without connecting it to wifi that would be cool. I don’t see how that would at all be possible but I don’t mind asking silly questions just in case.

The KP115 is connected to the local LAN via WiFi and the Sense TP-Link Integration is turned on. Sense sales data from the KP115 every 2 seconds giving you device info including the Always On data. But you get a full time history of usage as well. 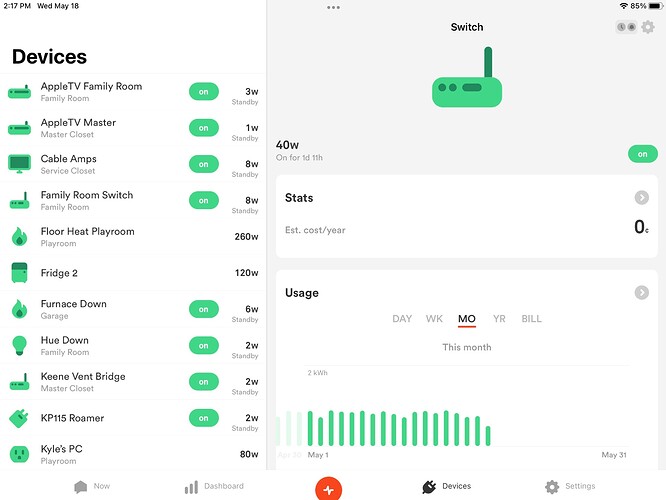