Please help with dual 300A + Solar Set up

Hi All, my first time posting.

I have a Sense Flex - with extra connections for my solar. I have the following on my property.

I have some questions however. I have a 300 AMP service coming into the house. It’s split into 100A and 200A breaker boxes. The 100A service is going to a subpanel inside the house, so powers things like fridge, washer dryer, heating furnace and everything else inside the house. The 200A panel powers the 1 BR ADU, pool equipment etc.

The Sense unit came with 2 pairs of current sensors. Can I install 1 pair to the 100A breaker and 1 pair to the 200A breaker? In theory I think that should monitor my ADU usage since its connection is supplied by the 200 A breaker. Also the solar output is coming in to the main 200A panel, so that should be monitored as well correct ?

I’m not sure exactly which wires are or solar input to my panel. I tried setting up as 200x2 service, but couldn’t get past the set up screens.

Also tried to set up the solar, but got stuck during set up. Currently it’s set up as a normal system and it has been working ok for everything hooked to my sub panel. Once I have the main installation correct, I have a few detailed questions about how Sense detects and displays the different devices. but thats for later

Any help in setting this up properly will be awesome… thanks in advance. 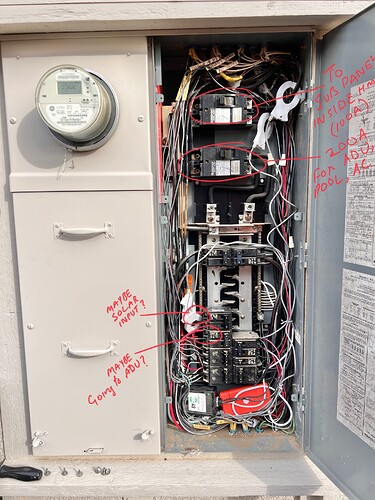 Three thoughts based on my experiences with Sense.

I would open the left side of the panel, attach the main CT’s in there. And leave your solar ones where there at. Then tell sense it’s a breaker feed solar setup. It should be able to detect anything in the house (100amp) or spa (200amp)

Thanks Kevin. Your bullet #1 is what I would also like to do. For this, I’d have to open the panel on the left (below the meter). Do you know if it’s normally ok to place main CTs inside that space? Have people done this before? There are no knock-outs between the two panels. I can see PG&E has put a little thin wire to discourage me from going in.

In theory this should monitor everything including ADU correct?

I really don’t want a second Sense for all the headaches of multiple accounts and needing 2 phones for monitoring etc.

I’m PG&E as well and had to do exactly as you suggested - crack open meter box and run the Sense leads through a drilled hole between the two. My electrician did the setup, but there are at least two postings here on the Community where PG&E came out to do it for the users (I wouldn’t wait for them - they’re a little busy right now). 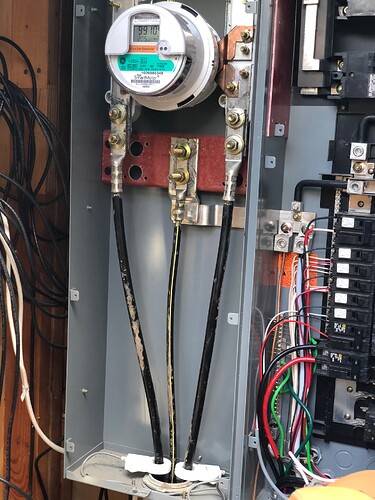 If the ADU is on a downstream subpanel, you’ll see it as part of the Sense Total Usage and devices there should be detected on the main Sense unit.

ps: You don’t need two phones for two accounts - I log back and forth between mine - Apple Keychain makes it pretty easy.

I would open the left side up, you might have to put them pre meter. I think that base has metal bars that come off the base all the way your 2 mains. They feed your 200amp and your 100amp breaker slots.

Thanks. Yes the ADU is on a downstream panel.

Just called PG&E, they won’t come out and do the hook up. But it sounds they don’t care if I open up the left side. I’ll keep the forum posted - will probably have an electrician come out and make the connection - I get nervous around 300 amps