A couple of weeks ago I suddenly received the dreaded message “Your Sense is Offline” while I was out of town traveling. And it never came back online. Once I got home I checked out the device in the panel and to my dismay I found it had taken on water during the recent storms coming through SoCal.

Water got into the main panel and went along the antenna connector right into the Sense device. Bummer. Upon closer inspection the water shorted the power supply section and damaged both PCB through galvanic corrosion.

Today parts from DigiKey came in and I’m happy to report I’m back online. The monitor is fully repaired and I’ve made some improvements to the panel to keeping it dry. I was a bit disappointed that Sense support wasn’t helpful at all when asking about some component details. Hoever, the design is an exact copy of a reference design in the data sheet of the primary switch mode controller IC. So it wasn’t too difficult to figure it out even without Tech Support helping.

pics or it didn’t happen 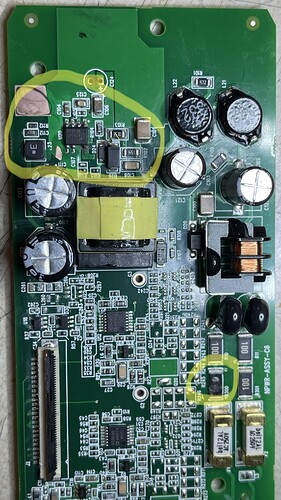 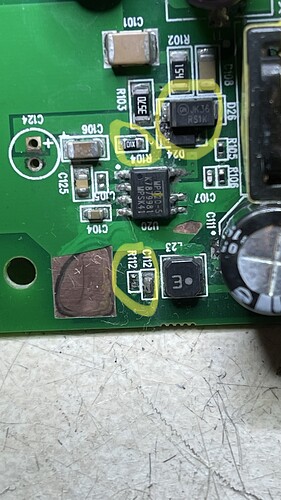 One of the 10 Ohm inrush limiting resistors burned up. The boostrap diode and its resistor supplying the MP020-5 were destroyed as well as the output filtering and load resistor of the main DC rail. The PCB showed arcing between the boostrap diode and the power supply diode where I had to dig out burned epoxy and repair everything with UV curing filler. The MP020-5 switch mode regulator survived the ordeal.

You can see where the water has done a number on the solder mask layer of the PCB. I repainted all that with new solder stop lacquer.

I didn’t take pictures of all the vias that corroded and opened on the back side. I used mag wire and fixed them all. And one 201 filter capacitor next to the memory chip on the logic board corroded off and had to be replaced.

Amazing job.
I lost my first sense (and all data!!) to moisture, but not rain , more like humidity settle on the PCB.
I always wondered if you make electronics that is in the outdoor environment, why not some waterproof coating over the PCB & components. Nobody is going to repair this for a living (only dedicated geeks

)
Might as well protect it to last a lot longer …

Thanks for the update! I’m a PCB designer so I always like to see how things were laid out in a design, and I used to repair electronics down to the board level, like this, so thanks for sharing

Agreed with others. There should have been conformal coating applied to the boards. That would’ve prevented at least some of the arcing. Also, I can see that maintaining relative humidity below 90% at all times might be difficult depending on where this get installed.

Unfortunately now my numbers appear slightly different. Before the main graph showed the total consumption of the house no matter what and the yellow solar graph showed solar production. Now the mains graph is offset by what solar produces. Once solar produces more than I consume the mains graph goes to zero, the bubble disappears and the detailed readings of the mains clamps go negative. I am not sure if that is a configuration issue or if there is still something wrong on the power supply board. Let’s hope not

I seem to remember reading about this where someone mentioned it’s a difference whether the solar feeds into the system pre- or post-mains current clamps and the setup needs to reflect that properly. I have a support ticket opened and I hope Sense Support can address this. I’ll keep you posted

Ok, pilot error. When I re-installed the Sense device the cover panel pushed one of the solar CTs partially open. As a result its reading was diminished and that led to all sorts of confusion (similar to when Sense recommends the extension cable). After correcting this I re-did the solar calibration and now all seems to be back to normal.

Tip: The give-away was that the power reading on the solar phases where different by a factor of 2. I believe the solar system always feeds power into both phases more or less perfectly balanced.