I am getting 1000X spikes. I have had utility company out and they are saying nothing wrong on their side. Does anyone know what would cause the power to be running hi all the time even the average graph is very high. 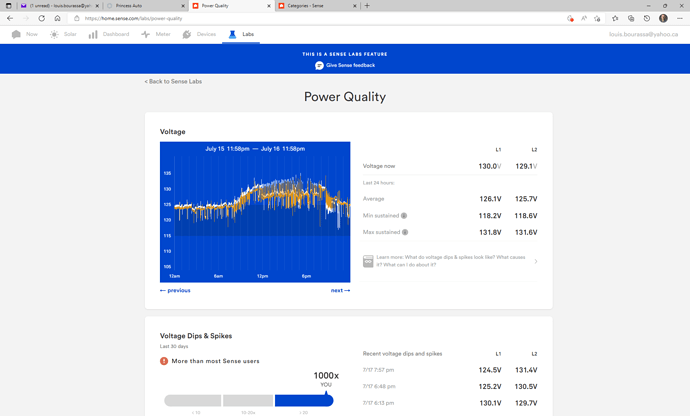 @louis.bourassa , that’s a measurement of line voltage by Sense, not power. It’s unlikely that a voltage measurement would be wrong. Do you have solar or a battery feeding your house as well as your utility ? The overage follows a curve that looks similar to solar production though it is offset a little too late into the evening. If no solar or other backfeed, that curve looks like the exact opposite of what I would expect i the summer - most utilities might show a fade in voltage mid-day as air conditioning loads begin to add strain to the grid.

Yes I have a solar system on my house.

@louis.bourassa, not sure of the exact mechanism, but I’m betting that your solar backfeed is kicking up your voltage.

I had this twice. The power company came out the first time and replaced the split bolts on the drop…. It didn’t fix it and a few weeks the drop line to the church across the street from me (same transformer) shorted out and caught on fire.

About 8 month later I started getting the (more than 1000 spikes/ dips) I had L2 dropping to 90v at times. I kept my eye on it and waited for it to drop again, I used a multi-meter to figure out my L2 actually had 120v and the breaker feeding sense meter was bad.

I do not have many drops in voltage, My issue is that both polarities are always running hi in voltage, which is most likely my solar system, which a very large 24 Kw system.

But ccook mentioned that he had a bad breaker feeding the sense meter. I did not have any spare breaker so I just used another breaker that is being used for a section of the house that is low usage. could this be causing the sense monitor to have more spikes?

Do successive days of overage have the same rise and fall shape that you posted over the same time periods ??

Yes everyday has generally the same profile look. Unless it is a rainy day and there is low solar production.

After reading a little more about solar, it seems likely that your large solar install could be muscling up the voltage at your breaker box. It looks like your grid voltage in the off hours (no solar) are near the top edge already. Solar inverters pump out a few volts higher than the incoming voltage to push power out to the grid. So a large solar array pumping out lots of power through breaker box to the mains would push the mains at the breaker box well above the incoming voltage.

ps: I think the Sense Power Quality graph might be off by an hour or two. My car charging that starts at 12:30AM shows up as a dip in voltage at 1:30AM on my current graphs. That would be why the solar curve might be offset later than one would expect.

I know this is an old post, but i wanted to give some input… Voltage will creep up if it can not push the current it needs to a source (solar to grid), so in your case if you are seeing a voltage rise in the breaker box, I would guess the feed to your home is only 100 amp service? that would cause the voltage to rise in your box, if your service is 200A then something is limiting the 24kw from getting out of your main panel, through your meter, or out to the utility transformer. If you do only have 100A service i would beef that up, the main breaker and wire out to the meter are not rated for 100% duty cycle at 100A. If you have 200A service borrow someone’s thermal camera and find the hot spot. I bet your solar inverters don’t show the elevated voltage. If they DO then whoever put your solar in needs to fix the inverter settings, it should have tripped offline at that voltage. But i’m guessing its in your panel or path to the utility.

Update. I have been working with my solar system installer. What the inverters do is they will create a voltage higher then the grid so that any extra energy produced by the system it goes out to the grid. So then why is the voltage ramping up until it reaches the max that the inverters can go. It turns out the the grid transformer on the street has a 10,000 Watt limit (100 amp service, as pir8radio mentions) and my solar system at it’s peak produces up to 18,000 watts. So that is what is the problem, I am now working with our grid power supplier to have this transformer upgraded to a 25,000 watt limit which should resolve my issues.