Hey all! I’m a homeowner in the suburbs of Boston. I’ve had my Sense system for quite a few years (since 2019). I’ve been upgrading our solar array so that we now have 2. One is the old one from 2014 and is about 8kW, while the new one (from Feb. '22) is about 12kW. Added to that are about 30kWh of battery backup in the garage. All of it is Enphase, including the batteries. I’ve been working to get the house to NetZero, and with the addition of heat pumps in 2020, we are almost there.
However, microinverters have been frying themselves for the past few months. The solar installers say the voltage is too high, coming from the transformer. I didn’t know about the Sense Labs till earlier this summer, and I noticed that the voltage was reading high, in the 130-131 range. But what caught my eye was the chart. I’ve looked at other posts in the forum and I haven’t seen anything that looks as “fuzzy” as mine.
The first chart is from last week:

The over-voltage has dropped somewhat, but it sure seems odd that there is such volatility. I am hoping someone here has seen something like this and can give me an indication of what it might be. The utility has been really loathe to even come out and set up the monitor, saying that it couldn’t possibly be on their end. I sent them the .CSV file and they finally sent someone out. I’ll follow-up when I hear back from them later in the week, but it sure would be nice if anyone had a theory as to what might be going on.
Thanks!
-Ace

Do you have 2 different types of inverters ?
M2xx for the old array and the new one uses IQ7 or IQ8 micro inverters?

Do you have 2 different envoys to monitor your micro inverters ?

However, microinverters have been frying themselves for the past few months.

Are your shutting down or are they getting defective and getting replaced under warranty?

The second is from when the utility finally came out and turned off the solar and attached a meter monitor (the break is when they turned off all power to attach it):

Are you saying the 3rd image was taken when the solar was offline and completely out of the mix?

They are going defective and being replaced on warranty. That said, the engineer at Enphase said that the inverters should be able to withstand the higher voltage.
And you are absolutely correct: the old ones are the M250 and the new array is using IQ7s. The old and the new are on different Envoys. That was an issue from the beginning of the new array install.

That’s exactly right. The solar is off on the third image.

They are going defective and being replaced on warranty.

Wow, if have seen a few go bad, but these things are almost indestructible. I once was at location where they were hooked up to 270 volt. They didn’t work, but they didn’t go defective.

That said, the engineer at Enphase said that the inverters should be able to withstand the higher voltage.
And you are absolutely correct: the old ones are the M250 and the new array is using IQ7s. The old and the new are on different Envoys. That was an issue from the beginning of the new array install.

Yeah, 2 different protocols is always a bummer.
Are both M250 & IQ7 breaking down?

That is a lot of noise on both phases, with and without solar.
Also the constant difference between the 2 phases tells me there is an issue with either too small of a transformer or a defective transformer( fluid leak)
Good thing your utility did come out to check.
I am interested in the follow up, please keep us posted

So far it’s just been the IQ7s going down. So maybe a manufacturing defect in a batch. The utility is coming back on Thursday to remove the monitor and go over the results. Hopefully there is good news.
I’ll update when I know more.

Wow, very interesting Power Quality graph, especially with solar out of the equation. I can see how this situation could be incredibly hard on inverters that are constantly trying to match the grid voltages. Let us know how it goes with the utility.

Indeed indeed.
The technician in me would love to see how the IQ8 inverters of Enphase would perform.
The DSP inside has about 1000x more computing power than the IQ7 ASIC.

So a few updates:

The utility company pulled off the monitor yesterday (Wednesday). It looks like they didn’t turn all of the solar back on. The old array is still down, and when I get back home tonight, I’ll see about flipping the switch. The voltage is still reading at 127+ on each leg, with spikes above 130.

The other big find: I took Tuesday off and decided to jump down the rabbit hole fo turning each breaker off to see if I could isolate a malfunctioning device that might be throwing off the voltage. Using the Sense app, I found an old laser printer that was still plugged in and warming itself up every 30 seconds. Spiking around 600W each time for a few second. I took that out of commision, and the “fuzziness” of the graph abated quite a bit. I am unsure if the printer was the final issue, since I took that offline at 10am, and the spikes tamed down around 1pm.

There is still some periodicity in there, but that may be the heat pumps. I’ve reached out to the utility to find out what they see.

Was it the printer ?? Is the fuzzy voltage graph gone for good ??

I’m still waiting to hear back from the utility. I ended up contacting the state Department of Utilities and lodging a complaint because the utility hasn’t gotten back to me.
The printer removal did solve a bunch of the fuzziness, but there is still something going on: 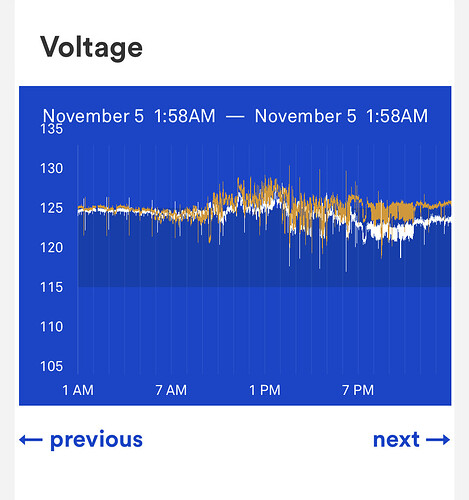 With the solar on, you can see a rise in voltage. But the spikes and dips are still there when the sun isn’t shining.