Power blinked off and on for maybe 2-3 seconds tops at 2:19AM on 9.29.2022. Some residual of Hurricane Ian in the State. Shows a spike in voltage just prior.

So why does that literal 2-3 seconds cause 90 minutes of missing data as seen in the graph? 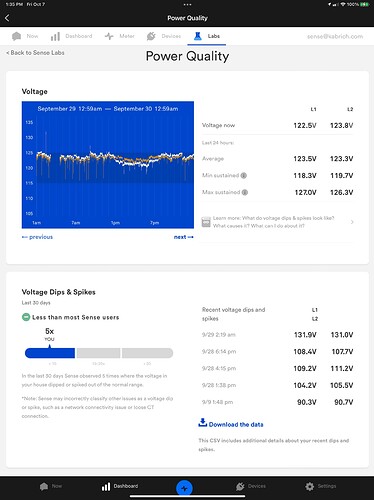 Interesting issue - this Labs feature is one you would wish that stayed on during adverse power conditions. Question - Are you also missing 90 min in the Sense Power meter ? to just a minute or two for reboot ?

This is the third time I’ve seen someone mention this on the forums. I have the same issue. A quick power blip causes a fair amount of lost data, although for me, it’s usually 15-30 minutes of data not 90. If that happens a few times per day during heavy usage, Sense will under-report total usage.

When I contacted support a while back for this exact issue, I got this response:

While Sense can store this data locally, the local storage on the monitor is volatile, meaning that any data that has not been uploaded to our servers will be lost in the event that Sense loses power. So, if Sense loses power during an outage, any data that had not yet been uploaded to our servers would be lost. Seeing a gap of this length would not be unexpected in this type of situation. As long as this is not something you are seeing too often, it should not have an impact on the overall Sense experience.

Data is probably batched in intervals as to not overload their API. Although it would be nice if it sent data more frequently, I don’t think they intend on overloading their API. I really wish engineers would revisit this and see if there’s any way to make this more graceful though.

To me 5 minutes of data loss is acceptable on a quick blip. It really shouldn’t be any more

Sounds like sense should add a 1$ supercap to the unit to allow a last gasp to the mother ship.

Or like discussed many times:
A reboot feature in web interface /app to force a reboot but maybe an option to save the stored data in ram so that when it is rebooted, it can still upload the data to the cloud?!

I wonder if they can utilize some kind of pubsub/mqtt or similar functionality for more realtime data transfer, rather than periodic API requests. I’d be surprised if that’s not how the realtime stuff works in the app currently. It’s just interesting to me that I can have the app open and be viewing live data in realtime, and if the power blips right then and there, I lose 15 minutes (or maybe more) of data historically.

Sense can’t be using too big of a batched packet size for API transmissions because we see 1/2 second updates with no more than a 1 second latency.