Question about solar data at sundown

I am wondering if someone can explain the particular transitions of the solar data when the solar panel system shuts down or starts up and what is going on during nights.

FYI: My setup is 15-panel LG system with individual micro-inverters. There are two things that I don’t quite understand:

(1) During the night Sense shows a constant positive (production) amount of 8W from the solar system. Given that Sense is really accurate are the panels really producing power? I remember the sales guys was gloating that moonlight would produce enough power to turn on the panel’s inverter but I doubt that.

(2) During the transition from day to night and night to day I see the solar value going negative for about 15 minutes. It goes all the way down to about -31 watts. I assume that is when the micro inverters wake up and actually draw power.

By the way Solar calibration was done and if I trip the breaker for the solar system the solar value goes to zero. So I doubt there is a constant offset but Sense really sees energy going through the solar CT clamps.

Here is an example at dawn. I believe the inverters are shutting down step by step and eventually the value goes negative but then comes up to 8W for the rest of the night.

Any chance your solar CT’s are getting some interference from a wire near the side. I didn’t remember exactly the numbers but I had a wire from another circuit (I think it was the fridge) and every time the compressor would kick on, my sense showed I was producing something like 12-20 watts. The wires wasn’t in the CT, it was just near the side.

And you are correct, as each panel no longer has sun on it, each unit will shut down. If you have just a bit of light on one, the voltage will start up. As the sun raises and you get more direct sunlight … the amps increase.
For example if it’s 7:05am and the sun just came up you might have 35v and 0.4 amps ( 14w) then at solar noon you might have 35v and 9.5amps (332watts)

When I de-energize the solar system by flipping the solar breaker off the readout goes to zero on the yellow solar trace. I assume once I flip the breaker open there cannot be any current running through the wires and they act like open-ended antennas.

My solar value over night fluctuates between 2W - 8W positive. Is it possible that cross-talk between the wires of the solar system to other wires in the panel induces a small current in the solar wires that get interpreted as solar production?

I think this happens because of non-optimal calibration in the beginning of the install.
Ask support if they can remotely do a re-calibrate without losing all your information that has been gathered this far.

There are multiple posts about this. I searched all about this as I have the same issue. The most official response I saw was from a sense employee who talked to the engineers and said in these forms that he was told this is should be considered non harmful noise produced by some micro inverters. I believe they also said that if it is under 10W or so it is counted as zero by sense in terms of total solar production etc. If you look at your solar production summary a day later you will note that it is recorded as 0kW 0cents overnight.

My thoughts are it can’t be noise from a nearby line if it always goes to zero when you flip your AC disconnect. I think it relates to the capacitors in the microinverters and some effect or phase shift they cause in the reactive power that causes it to register as real power. Of note when it is dark real current is still flowing into and out of the inverters at 60 cycles per second from the grid. Due to the current and voltage phase offsets no real power is transferred except what is needed by the inverters (standby mode wife etc) and resistive losses. But this real current is interacting with capacitors which charge and store energy (but not instantaneously). I wonder if the power correction and interaction provided by the capacitors causes some tiny phase change that makes it look like a tiny amount of real power being “produced”.

In any case it would be great if sense could just make any solar production between -10W and +10W show up as zero on the bubble map and device list.

Not sure if that helps or is just confusing but that is where I ended up after looking into this issue.

I have a couple of updates:

So in conclusion I agree with what others said in that once the micro-inverters are connected to power there is some sort of in-phase current flowing that Sense interprets as net generation.

It would be nice if Sense could offset its readings by whatever it “sees” right after turning the breaker for solar back on.

I believe most peoples grid tired inverter use power at night and your sense CTs should read these as a negitive value. Such as -4 where it shows production. The CTs should be that sensitive. Is it possible you have one CT facing one way and the other facing the other? The labels on the CTs should be facing the grid’s power source. If they are on their correctly and your seeing production at night … I agree with Danny and would think your sense needs to be calibrated and would open a ticket.

The CT clamps for the solar channel are in the same orientation. Both labels are facing the solar panels. The solar feed is coming into the bottom of the panel and then the wires run behind the meter to the breaker area.

Do you think that Tech Support will do something different than me executing the solar calibration routine through the iOS application? I most certainly don’t want them to wipe out all historical data and telling me that I have to start over. That’s why I’m hesitant to ask them to do anything. 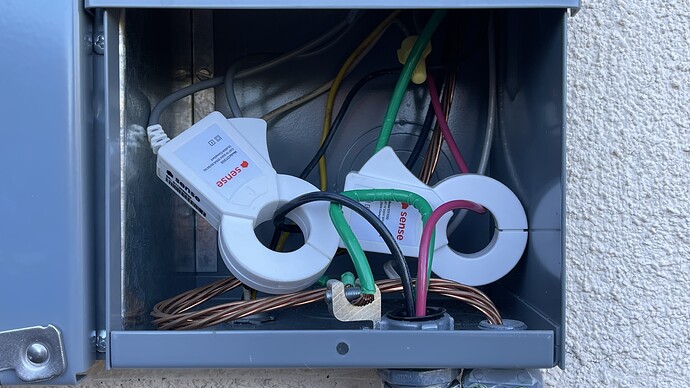 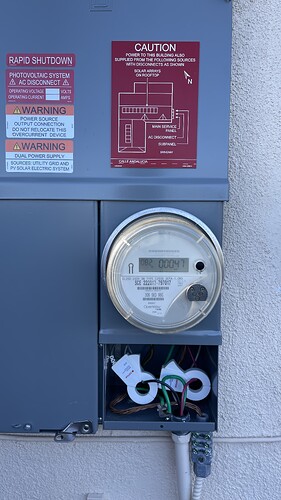 On the left CT… Is the black wire behind it laying against the CT? And the CTs are flipped the wrong way. The labels should be facing the gird.

When I first installed the Sense system about a year ago it failed solar calibration and the solar production would always be shown as negative value. I was on with tech support and somehow progress was slow. Eventually I decided to flip the solar clamps and that made everything work as expected.

Unfortunately I don’t know enough of what Tech Support can do on their end in terms of additional settings. Maybe they flipped the sign of the solar channel on my device or something similar. Or my solar CTs are wired wrong internally and that’s why they work in the flipped direction. Who knows.

I could go ahead and do more systematic testing (swap solar and main clamps or even test output of clamps with an oscilloscope while running a known DC test load through them) but at this point I don’t mind. I really don’t want to mess with the mains clamps and risk loosing the learned signatures of my devices.

Regarding the question if the one of the clamps is leaning against the black wire: 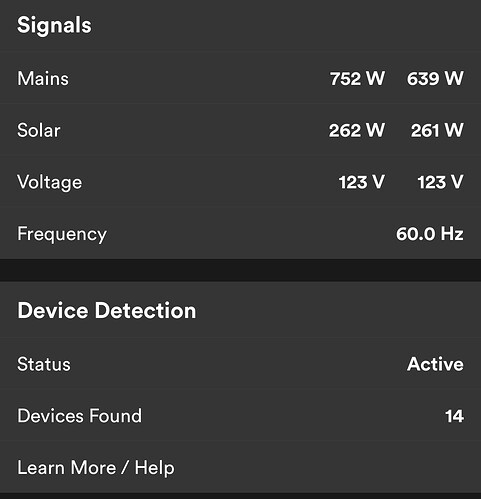 @Ingo ,
Thinking about the solar calibration step, I’m not sure that trying to zero out nighttime numbers would be a wise endeavor. In my mind, the main goal of Solar calibration is to set the scaling of the solar channel measurements for each leg, so that they exactly match the scaling of the mains channels/CTs when the sun is shining. I assume that Sense saves measurements from all 4 channels, just before the inverter is shut off, just after the inverter is shut off and just before and after the inverter is turned back on. From those measurements they can compute the offset (to zero) and scaling factor for each solar CT. If they don’t get them exactly aligned, or if one of the CTs goes out of whack, we’ll see the dreaded solar “leak” into total usage. I think the tricky thing here is that I can see cases where the inverter(s) might still be either pulling some energy or outputting some energy, even when off. But since that is also being measured as part of the mains (combined with house usage), it becomes the zero reference for the measurement.

that makes perfect sense. And I am really not concerned about the 8W offset I am seeing at night. I do not get any of the “solar leak” issues and that is most important to me. After all Sense needs to add whatever solar produces to what it’s reading on the main CT’s to report correct total usage. And that data looks great over the day. Even when a couple of inverters go offline and producing a 500W step in solar production there isn’t anything visible on the total consumption graph.

Also the number Sense reports as feeding into the grid and what my smart meter reports are perfectly matched. I will watch the EEVblog episode 1487 to see what my Australian friend has to say about reactive power. That probably explains what I am seeing.