Timeline lag and Kasa not reporting?

Between 3:06 and 3:12am all Kasa plugs (I have many) stopped reporting to Sense. Plugs continue to work in Kasa app and Alexa.
Natively detected devices are lagging and time stamped up to 10min after time bubbles appear.

Power cycling Sense and router did not resolve issue.

@JuliaAtSense can you check this, please?

Hey @obscuredtrip and @Edison517, our team is currently working on a fix for this so that your Kasa plugs work again.

I received a new firmware update last night at 2:16 AM CDT. Have you checked your monitor for a new version?

How do you know when you receive a firmware update?

@JuliaAtSense thank you for letting us know they acknowledge this issue and are working on a fix.

Same for me - all the Kasa plugs stop reporting to Sense at about 12:30AM Pacific. 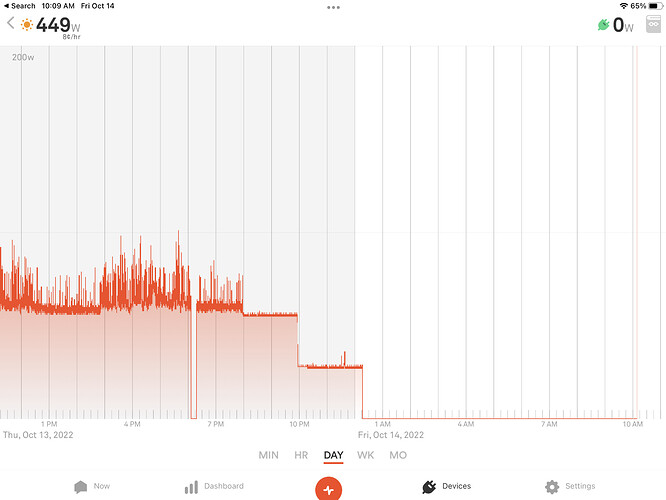 Hue and Wiser continue to report, though my Kitchen Wiser switches are seeing far more huge spikes than before. As we know, the Wiser app does not see these. 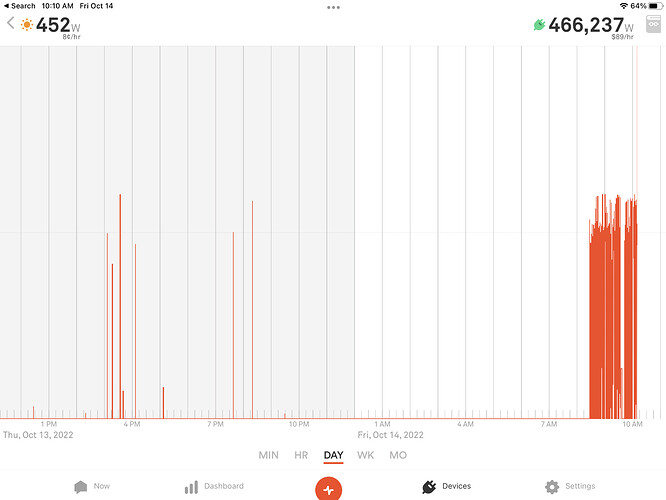 @JuliaAtSense, should each of us contact support@sense.com or are they aware and working with engineering on a blanket solution of all users ? Does anybody need more data / access to accounts to figure out ?

That’s correct @kevin1, they are working on a blanket solution of all users.

All of my Kasa plugs are gone too. Tried rebooting the Sense unit and disabling and enabling TP-Link integration. Still nothing.

Yet again Sense support responds to another one of my tickets with a generic cut and paste response.

Amir with Sense Customer Support believes the fix for this issue is for everyone to reset all of our smart plugs, then after resetting the plugs we need to make sure the device is plugged into the smart plugs is turned on. That will refresh the network and announce themselves so Sense can recognize them.

@JuliaAtSense
Sense really needs to reconsider subcontracting Goodbay Technologies to outsource Customer Service overseas. It embarrassing, chapening out the Sense brand to something we would come to expect from a no name product sold on AliExpress or Alibaba.
Between CS, recent outages, failed integrations, Improvements announced over 2 years ago yet to come to fruition, etc… I really hope Sense finds a way to get back on track as this is not a good sign as to the future direction of a product we are so invested in with high hopes of living up to it’s claimed potential.

Yet again Sense support responds to another one of my tickets with a generic cut and paste response.

@JuliaAtSense
Between CS, recent outages, failed integrations, Improvements announced over 2 years ago yet to come to fruition, etc… I really hope Sense finds a way to get back on track as this is not a good sign as to the future direction of a product we are so invested in with high hopes of living up to it’s claimed potential.

I bet you the handouts Sense prepares for the next round of finance has all the buzz words:
world leader in […]
But realistic support for end users ?

I opened several tickets over the many years I have sense.
When there is something they don’t (want to have) an answer to, they always say the magic words “we will look into it” and turn it into a cold case.

This could have been so nice.
Why spent money on fixing elementary issues when you can get more new money with promises/visions of the future.

Socioeconomics, HEEHRA = Sense RT-PMP + Schneider Electric + Landis Gyr sprinting together in hopes of cashing in on the ability to control our energy usage.

This could have been so nice.

Strange. Which day this this happen? I do not see anything strange on my 20+KASA devices on Thursday or Friday.

Here’s my Dell switch with POE that is always on. 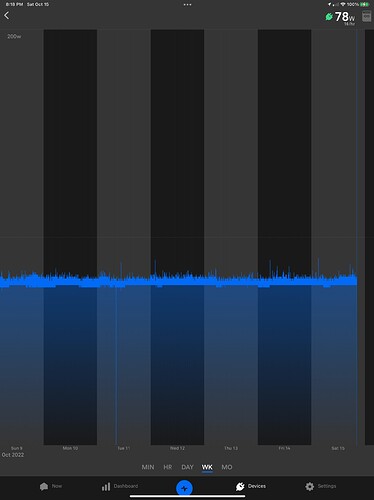 I’m on 1.37.3689-fbf0c631-master which obviously a previous version than what is listed above by some experiencing this issue.

Anyway to stop firmware upgrades from happening until they get this fixed?

No data recorded for that time. Also no on/off notification alerts.

I’m on 1.37.3689-fbf0c631-master which obviously a previous version than what is listed above by some experiencing this issue.

Not sure why Sense has you running an older version.

Looks like my Kasa smartplugs went back online with my Sense monitor just a little after midnight Pacific time. This is from the HS300 that watches over my PoE switch usage, 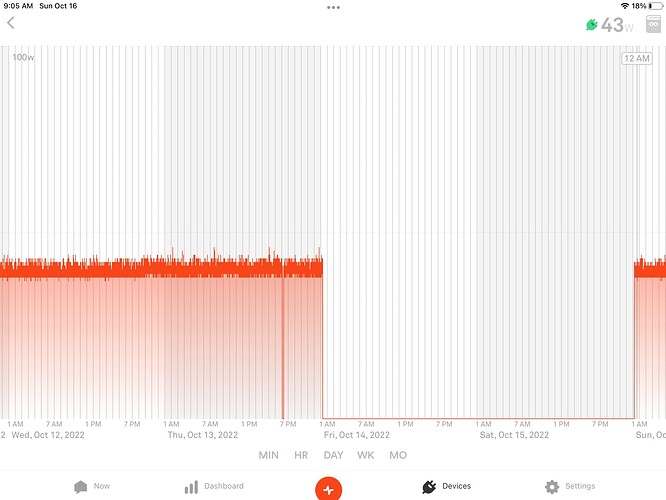 Guessing that the same new new firmware as @obscuredtrip did the trick:

We’ll see how my few Wiser devices behave, but at least right now, I’m seeing correct readings for them as well - my kitchen lights are on a Wiser switch. 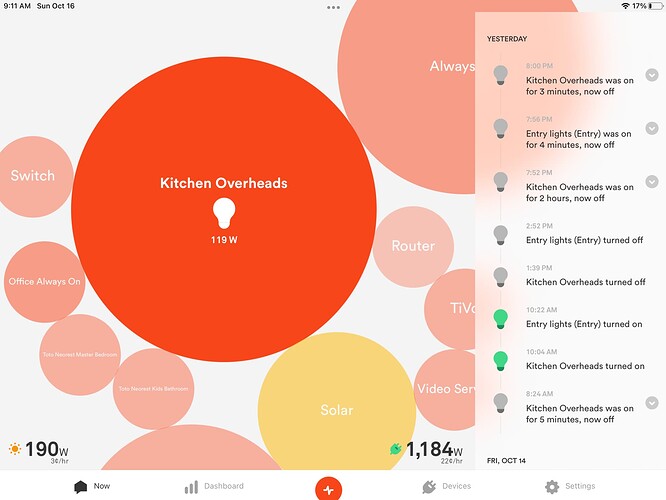 Update
After a couple hours with the Kitchen Lights turned on, the Wiser integration is still showing a few crazy measurement spikes, but nothing like I was seeing with the version of firmware that stoppered up Kasa reporting. 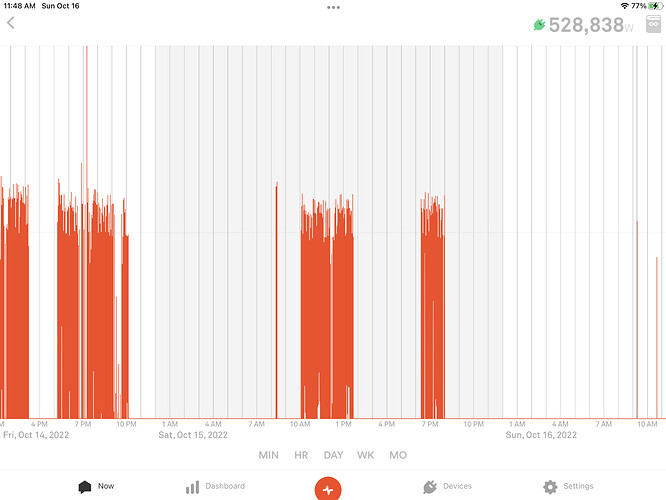 I’m still on the OLD 1.37.x version with no issues seen on KASA plugs (115s and 300s). Guess one time I was not upgraded for whatever reason is a blessing in disguise.

Are you guys signed up for early beta or priority distribution or the like?

@Beachcomber,
I’m not aware of a beta. I do know that Sense rolls firmware out across customers over a few days. There’s a chance that we received the production firmware ahead of you and spotted the issue. We’ll see if you get the same within a few days.

I just want to know how @Dcdyer knows when his firmware is updated.

I check the monitor version on a daily basis.

How did you know what time it updated?