I’m just a user figuring these things out. I posted a few replies over the past couple days to community questions, then realized together, they tell a fuller story.

There are four different general technical types of device identifications in Sense-land. And there could be more in the future.

Because they are doing actual measurements, the second to last category (with smart plugs and DCM) include the Always On for a device, the rest likely don’t. Example - I have Ecobee Historic and Sense now does a darn good job of identifying my AC units, but it still misses the 6W or so that are always flowing to the electronic control board and thermostat.

What Type of Transitions Qualify as “Clean” for Native Detection ?

Sense is looking for specific on and off transitions for native detection - ones that are sharp, and last less than 1/2 a second or so. Here’s one way to “see” roughly what Sense is seeing, at least as far as traditional detection is concerned - let your Power Meter go for a while in iOS/Android app (specifically NOT the web app). The app Power Meter will tag “transitions of interest” using an heuristic algorithm with the power change of that transition - these are the ones that are most likely to meet Sense’s criteria for traditional detection. Here’s a view of some of the tagged transitions for my house.

If you see your device turn on and Sense doesn’t tag the on transition, or breaks it up into several tags, in the Power Meter, then the transition doesn’t fit the model for traditional detection.

But and even if Sense “sees” a transition in the Power Meter, that doesn’t mean that
it is ready to detect it as a device - the transitions must pass three other tests:

One of Detection’s Biggest Enemies - Noise
Sense uses transitions for native detection, so you would think that lots transitions would be a good thing. The reality is that transitions are only good to a point - too many transitions, especially good-sized ones create “noise” that can swamp out less frequent and smaller transitions happening in your house. Some typical noise sources:

More on noise and how to reduce it here: 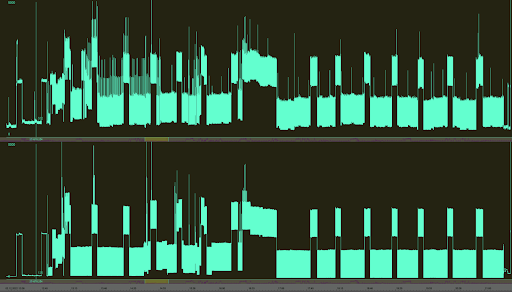 Do the appliances in your home create a buzz of electricity? You may have an electrically "noisy" house.

How Does Sense Save “Transitions of Interest” to Learn and Search to Remember and Detect ?

Here’s a partial view of what happens when those “transitions of interest” reach Sense’s “brain” back at the Sense mothership. Each transition has around 20 measured parameters or features associated with it, and Sense drops each transition point into a corresponding 20 dimensional space - here we’re seeing only 2 of those dimensions, some measure of power on the y-axis, and some kind of phase measurement on the x-axis. (you can see that there are at least 17 dimensions or “features” from the screenshot labeling). 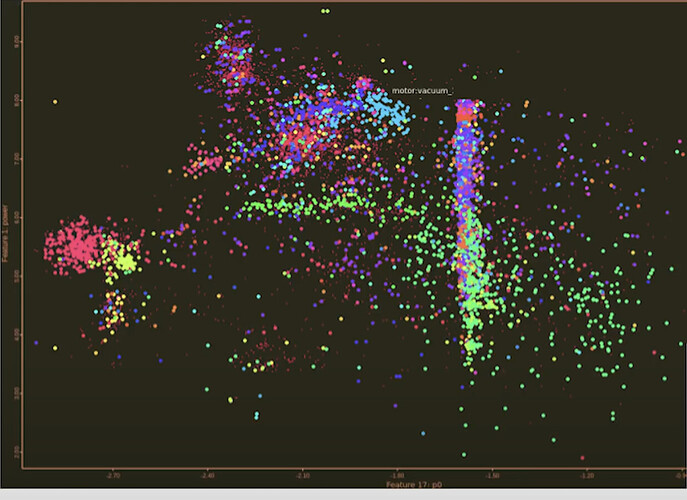 Over time, the accumulation of transition points create clusters. If the cluster is confined enough and dense enough, and if it has a matching “off cluster”, it graduates into a detection. I think colors here reflect different clusters, though you have to remember that we’re only seeing 2 dimensions of a 20 dimensional cluster, so the clusters would be much more apparent in 20-D space.

Google does something similar in this experiment- they categorize thousands of sounds by many features, then distill down to a 3D representation. You can roam around the neighborhood of a particular sound and hear similar sounds. 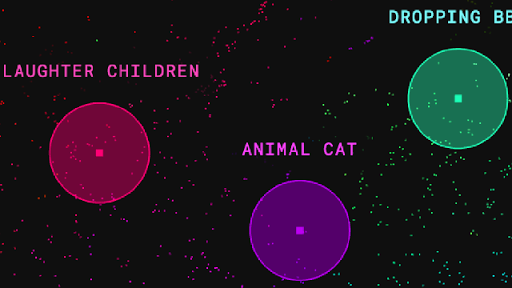 Since 2009, coders have created thousands of amazing experiments using Chrome, Android, AI, WebVR, AR and more. We're showcasing projects here, along with helpful tools and resources, to inspire others to create new experiments.

The Problem With Clusters

Clustering works well when clusters are truly distinct and algorithms can cleanly separate them. But unfortunately the real world isn’t usually that tidy. Clusters typically overlap in the dimension space and algorithms have sort out which overlapping cluster a “detection” belongs to. The example on the right shows an example of 3 slightly overlapping clusters. How should an algorithm slice up the boundary regions ? No matter how it is done, there are going to be some conflated detections. 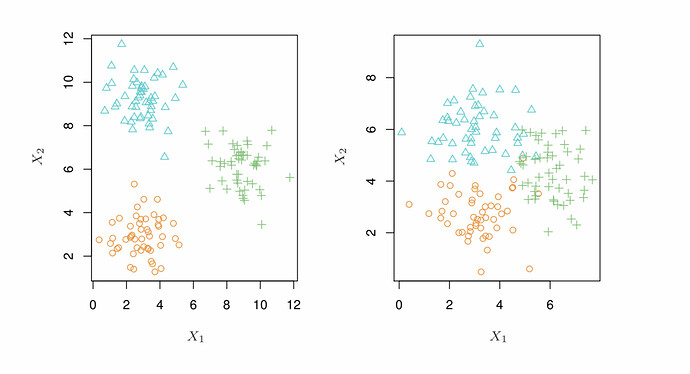 How do Sense “Native Detection” Models Improve Over Time ?

As shown a little earlier, identifying devices is all about finding and divvying up the clusters of transitions in the many dimensional chart above. For purposes of this discussion, let’s call this the transition “dimension space”. So improving detection requires doing a “better” job of picking out clusters within the dimension space without upsetting existing working clusters, as much as possible. I can’t speak to the algorithms used, but can give a little insight into when the various clustering algorithms are invoked - they probably use several:

Any questions so far ? This is what learning looks like ! 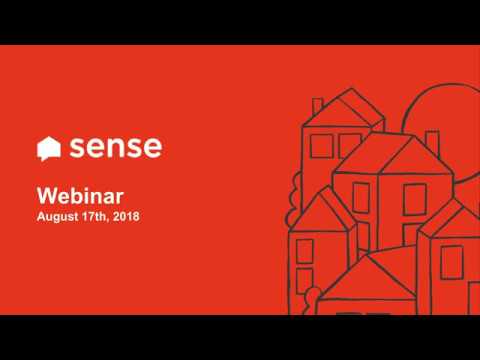 This is great @kevin1 - I’m going to take a longer read through this today and add it to the New User Guide if everything looks alright.

AOK with me ! Feel free to correct or refine as needed. And feel free to rename things using Sense’s internal vernacular as you see fit - would be great to have users talking the same language as Sense developers. And of course, position correctly, in the light of ongoing development efforts

@kevin1 @JustinAtSense does having a smart plug on something actually help Sense detect the underlying device? Does it help refine the signature for already detected devices? Both? Neither?

Would really just love the factual/definitive answer on if having the plugs does anything for native detection.

If a device is both on a smart plug and gets detected, you get double counting and have to adjust the settings.

This is my thinking, not based on Sense input.

BTW - one of the things that confuses people about detection, is that they see the time domain waveform as the device “signature”, without really comprehending that the real signature is really a many dimensional cluster of points.

does having a smart plug on something actually help Sense detect the underlying device? Does it help refine the signature for already detected devices? Both? Neither?

@kevin1 response above is correct. But, to answer your question directly, no, the smart plug does not automatically feed that signal back into the detection algorithm for a variety of reasons. The posts stating that someone added a smart plug and then saw a native detection of the device come through are coincidental.

Added update on Noise as well as many more links to Sense blogs.