I have had sense for over 5yrs. I also have a solar system and the solar kit for sense to monitor it.

In the last year my sense unit will just go offline mysteriously. The first time it happened I did a ton of troubleshooting and eventually found that it required a full power reboot. The problem is that with a solar system this means I have to shutoff my home line power mains as well as my solar array disconnect.

This is getting very inconvenient. Could you implement a power cycle in the logic so if the device doesn’t come online in a given period of time it will automatically power cycle itself and try again rather than forcing the home owner to shut everything in the home down to power cycle this thing?

No dedicated breaker. Typical install just uses induced power from the CT clamps on mains. Which means u have to shut mains off to kill the power. If u have solar u have to shut that off as well.

I would question your comment about typical installs having a dedicated breaker just for the sense device. Take a survey.

Here’s Step 7 from the current Sense Install instructions. The Sense monitor needs a power source as well as place to measure voltages - the dedicated or semi-dedicated 240V breaker is that source. Your Sense has to be connected to both voltage legs somewhere - you might surprise yourself and discover you only need to flick a single breaker. 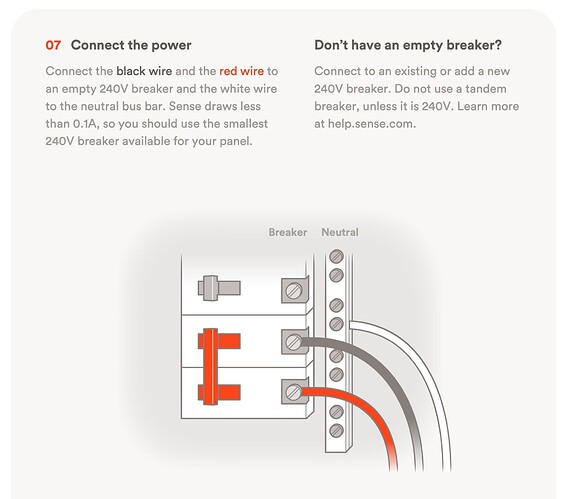 As i said. No dedicated breaker. It is likely piggy backed off of an existing breaker but w/o taking my panel apart who knows.

I think we are missing the point here. Aside from ignoring my statements. This thing shouldn’t need to be power cycled several times a year. That is either a poorly designed product or malfunctioning. Essentially you are telling me to turn off one breaker instead of another… big deal. Still doesn’t address the root of the problem.

@mitch.riley1772, I agree that the hardware shouldn’t need regular cycling and that an automatic watchdog reboot would be nice. You might want to like this pre-existing Wishlist item that asks for something similar:

I purchased my Sense in 2017. During this period of time I have not yet had a year of data without holes in my usage data. I THINK the cause is Power goes out Internet goes out Router and AP on battery Power comes back Sense connects to AP, no internet available yet Internet returns Sense is offline until I cycle power on it Now that we get emails when the device has been offline I can usually catch it before to much data has been missed, though annoying. This time however, I missed the em…

But unless you have replaced the monitor before, you’re dealing with a 5 year old piece of electronics that contains hardware that can go bad - for instance, flash memory only offers a limited number of write cycles. Hence my thought about talking to support about replacement.

I’m not missing your point, but I did want to offer you an approach that might give you a little less aggravation. For some high percentage of users, the power reboot is far less intrusive than what you have to go through.

While it is uncommon for the Sense unit to need a power cycle it does happen. I wouldn’t consider a couple times a year concerning especially when compared to most other “smart” devices. If it is happening much more often then I would try reaching out to support.
Normally when Sense goes offline it’s do to an issue with your network rather than the unit itself, I assume your ruled that out as part of your troubleshooting.

As far as powering the unit, they do not work off induced voltage. It is recommended to use a dedicated 240v breaker however when that is not possible due to lack of space it can be connected and shared with an existing 240v breaker. It should never be connected to 2 single pole breakers and is against code to do so. 240v breakers appear as 2 breakers linked together or one extra wide breaker so that should narrow down the possibilities without removing the panel cover. You can shut them off one at a time until your figure out which one your Sense unit is on.
If your Sense unit was installed by your solar installer I would try the breaker for your solar first.
While not ideal, it’s better than having to worry about shutting everything in your house off.

As my Sense went offline overnight several nights ago around 3AM and notified me about 4AM, fixing around 5AM, how about a selectable option to automatically restart Sense device if device cannot ping Google DNS (Sense Servers too many offline times) for x # of minutes.

My sense monitor seems to go offline when there are short power interruptions and then sometimes require a manual power cycle. AC compressors have a time delay to prevent restarting into high pressure. Could a similar time delay help reduce the need for manual restarts? On any power interruption keep power to sense shutoff for 15 to 30 seconds.

To: @mitch.riley1772 - Review this very old blog (Sept 2018) on the same issues you are having. My solution was to add a cheap TD-69 Delay timer. Same solution that @slim24h-turbo is suggesting. Currently, I have my delay timer set for 4 minutes. Re-read the whole blog/thread. There were numerous people responding and commenting.

Background: If we have a residential power outage, the SENSE monitor quickly restarts before the internet and WiFi connection has been re-established. The SENSE software is not robust enough to reconnect later if WiFi (or internet) is not present (or available) during the reboot phase. When we have a neighborhood power outage, it affects our ISP neighborhood hubs along with our home network. It takes time for the internet and WiFi connections to be re-established at all the different locatio…

If you open up your breaker panel to investigate, Take numerous pictures from every angle. Post them on this forum so other users can understand what you are describing. Also, pictures will help document your installation.