Solving This Common Scenario
A mysterious new Fridge 3 shows up ! How do you figure out whether it is related to any of the existing Fridges in your house, or any other device for that matter ? Mathematical correlation can help find the hidden relationships, probably more easily than overlaying waveforms.. I’m going to try to three comparisons using the Pearson Correlation coefficient. I’m not going to go into math, but the picture below is very intuitive - plot the energy/power usage of two devices at each hour (from Sense export) against one another and take a look at the line that fits them. 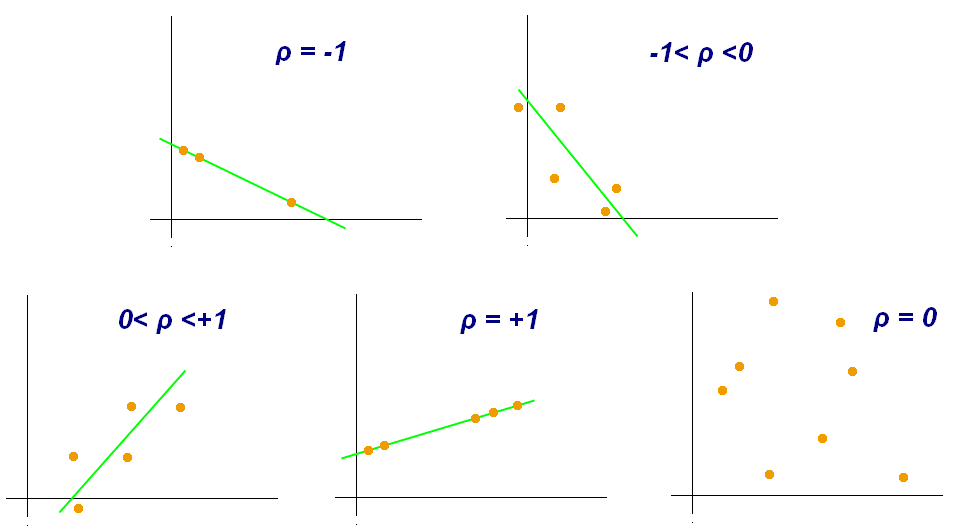 I’m going to try to do 3 things with hourly data from Sense data Export.

Correlation Between Devices With the Same Name
When I downloaded my hourly Sense data for 2022, to do some analysis, I discovered a few devices that had the same Name but different Device IDs in the data. Originally I thought these duplicates (below) might have been the results of Merges, but after a little more investigation, the origins of the duplicate names were are little complex.

Going Deep on the AC 3 Pair
I’m going to compare the AC 3 devices first, though not before a diversion to talk about Sense and messy data. Since correlation analysis is going to compare usage side-by-side between devices, let’s take a look a representative slice of the AC 3 data (below). 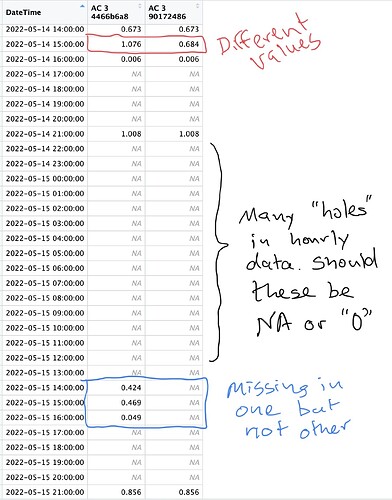 Notice the profusion of NAs, mostly in both columns together. NAs show up when Sense does not log any information in the Export file for that device in that hour. You won’t see NA’s in the Export file, but you will see the “holes” appear ,where Sense hasn’t logged any usage, if/when you pivot the Sense data from their long “log” format to a columnar format with each device having column. The “pivoting” software (Excel, R, etc.) usually gives you an option of how to fill the “holes” that are created. In my case I filled them with NAs (not available), but the real data question entails getting back to what the NAs mean. The NA could be caused by:

Other notes on the side-by-side device / column comparisons:

Now that you have a little background in the data, here is the corresponding correlation data:

First using my data above, with all the holes filled with NAs. All the data with 2 side-by-side NAs and NAs in any single column (mostly the left) are removed from the comparison. Looking at the chart, these two are very likely the same device, though there are some differences, where the remnant is lower than the full AC 3. The correlation coefficient is 0.992*** showing significant correlation, which is quite good considering the number of points compared. BTW - the number of asterisks indicates the statistical significance of the coefficient. Three asterisks is the max and says that there is no change the correlation is accidental. 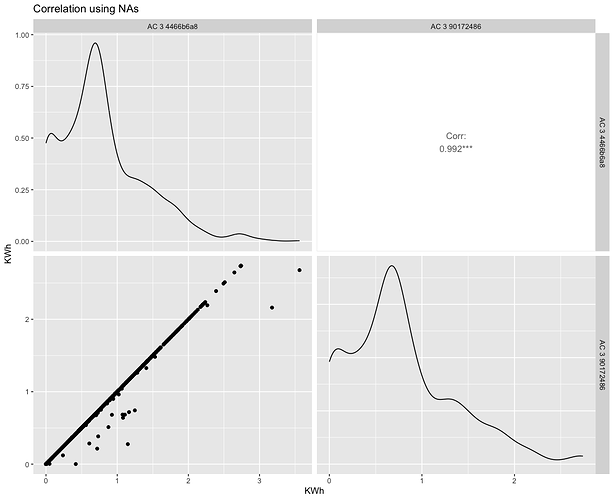 Here’s the same comparison when we fill all the “holes” with zeros instead (all the points on the bottom of the lower left graph). Many points where the left column is a real usage number and the right was NA, but now 0, are suddenly introduced into the correlation calculation taking the coefficient down to 0.839***. 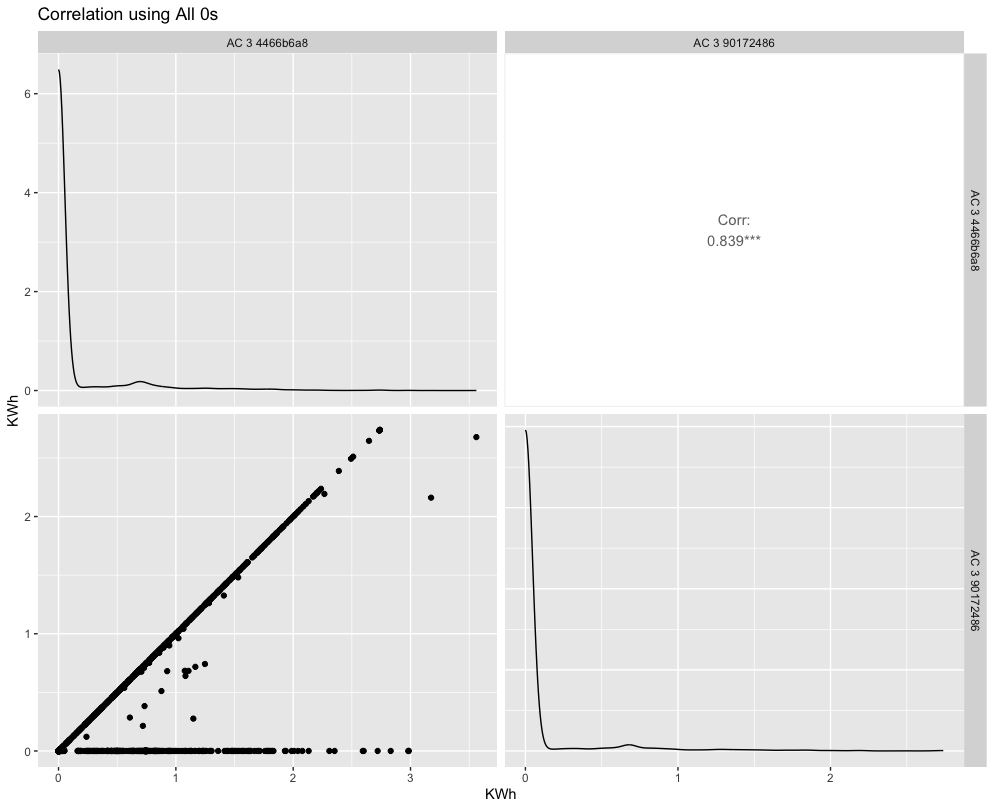 Here’s a third version where I tried to intelligently insert zeros in place of NAs, but only when the device appears to reside in my house. I basically only converted NAs to zeros between AC 3’s (artifact) first appearance and last appearance. Even though the lower left chart looks similar to the last one, the correlation is far better than even the first comparison, with a coefficient of 0.994***. How could the correlation be better vs. the NA-filled example at the top, given all zeros along the bottom ? The distribution curves, on the upper left and lower right, show the reason - the Intelligent 0’s approach adds many 0,0 data points to the correlation calculation, that weren’t there in the first calculation. 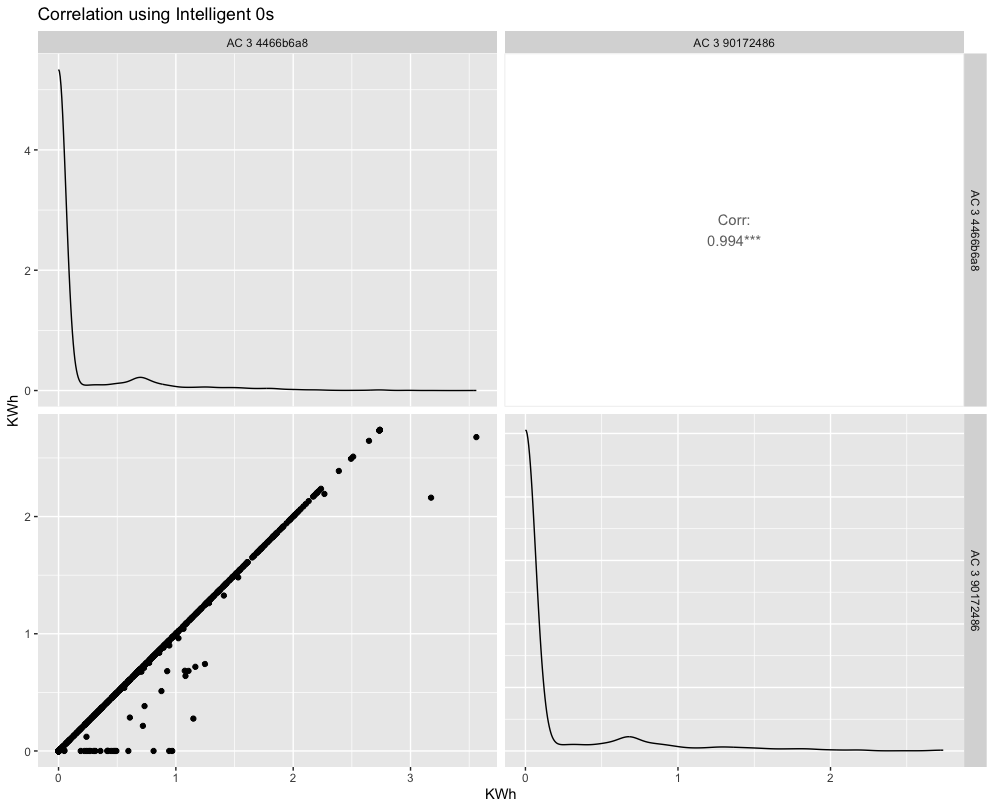 Going forward, I’m going to need to be exceptionally careful with this hidden filling, especially since native detections look far different than smart plug data when it comes to “holes”.

Moving to the Kitchen
Let’s move to the kitchen and look at the correlation between the 4 devices there. The Microwave and Coffee Maker in green correspond to the real devices in our kitchen. Based on what I’m seeing, I believe the other two are devices that were detected as Microwave and Coffee Maker, but I haven’t been able to connect them to existing (they aren’t merged - just have the same name). 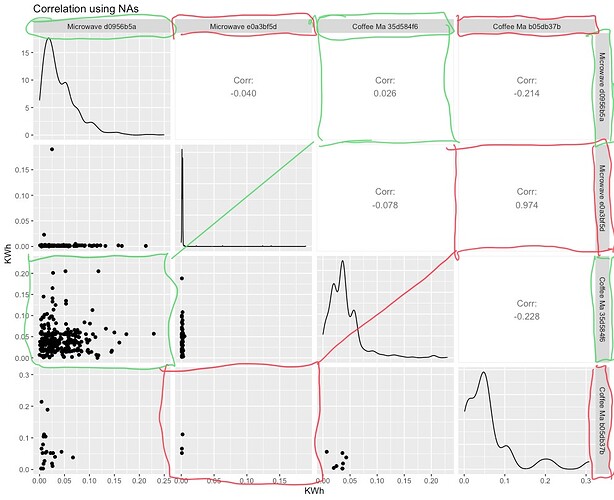 But now we get to the interesting part ! I’m going to replace NAs with zeros in an intelligent way (only replacing after the first time the device showed up, and only until the last time we saw the device on). In essence, this smart conversion of NAs to zeros, adds missing of data to all the devices. When I run the chart, I see a very different result. The correlation between the Microwave that isn’t my Microwave and the Coffee Maker that isn’t my Coffee Maker has completely disappeared - the 3 points have blossomed into many more with either the Coffee Maker or the Microwave being off, killing off calculated correlation. In a reversal, the addition of off behaviors (0s) has improved the correlation between my real Microwave and my real Coffee Maker, as well as confirming the coefficient as statistically significant. And there is a real world phenomenon that explains this partial correlation - I make my single serving Nespresso coffee in the morning, usually within the same hour as I heat up dog food in the Microwave for our pups. But there are many other hours when we use the Microwave and my wife’s coffee comes an hour later. 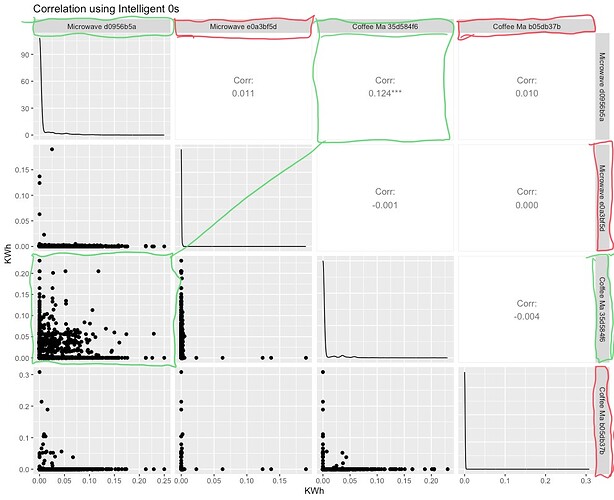 BTW - Thanks to this exercise, I think I have also IDed the real second Coffee Maker - It belongs to our dog sitter. She brings her own - I noticed that it only showed up during times when were were away from home ! Still need to ID the second (really third, because Sense has found both the active Microwaves in our house).

Now that I think I have the methodology down, I’m going to work on a new post looking at all the non-duplicate mystery devices together with likely correlation partners to see if I can solve any more mysteries. LMK - If you have any questions.

Fortuitously, here’s a new article that evalutes a bunch of algorithms for quantitatively evaluating the differences between two (electrical usage in their case) waveforms !

If the absolute amplitude of these peaks and troughs doesn’t matter to us, then we’re probably best off choosing the correlation coefficient as similarity metric.

How can we quantify similarity between time series?

Same Experiment with Home Assistant Data
Given that I can get higher sample rate data out of Home Assistant, I decided to try a similar experiment in using Pearson correlation to determine whether waveforms are related. But due to a couple of factors, I had to be especially careful, above an beyond the care I took with the direct Sense data - Reasons ??

My first attempt at correlation was using data for Solar Production from my Sense vs my Tesla inverter data. There were 3 separate entities associated with that: 35_elmwood_solar_power, and 35_elmwood_solar_power_2 come from the Tesla cloud/inverter - there are two because the Tesla HACS integration changed in the might of the month. And energy_production comes from Sense. HA does some renaming to meet its conventions, sometimes. Here’s a view of the results based on sampled and filled 5 minute data for Sense vs Tesla. 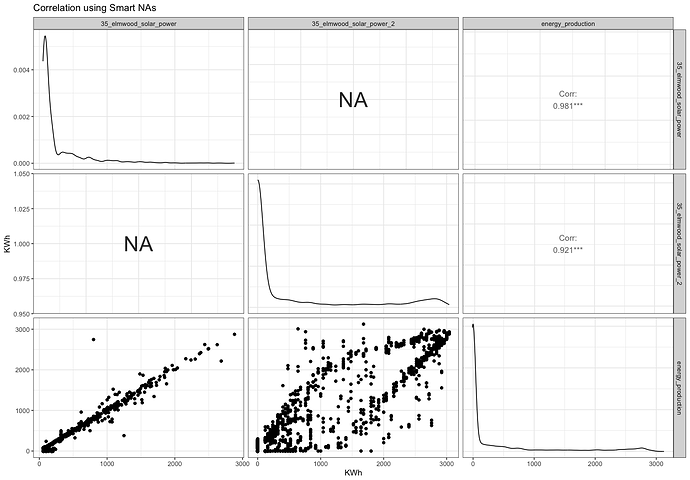 A few things are visible:

This is 35_elmwood_solar_power (Tesla) vs energy_production (Sense) for a single day. Tight correlation except the Tesla data occasionally undershoots or overshoot the Sense measurement.

Below is 35_elmwood_solar_power_2 (Tesla) vs energy_production (Sense) for a couple days. Notice that the Tesla sampling resolution is larger, albeit with no overshoots or undershoots. Judging from the scale, the sampling interval is 15min rather than what looked to be 1 minute with the earlier integration. The larger sampling resolution also delays the Tesla waveform from the Sense waveform, while also making it less accurate in the time domain. That helps explain the “bee wing” shape for the line.

Eyeballing the two waveforms in InfluxDB (because it allows more plotting options than native HA), it looks like the new sampling technique in the Tesla Integration delays the data by about 40 minutes. I’m not sure where that exact number comes from - given a 15min sample interval, it should be either a 15min or a 30min delay, but I’ll look at both 30min and 40min when I adjust the data to check correlation again. 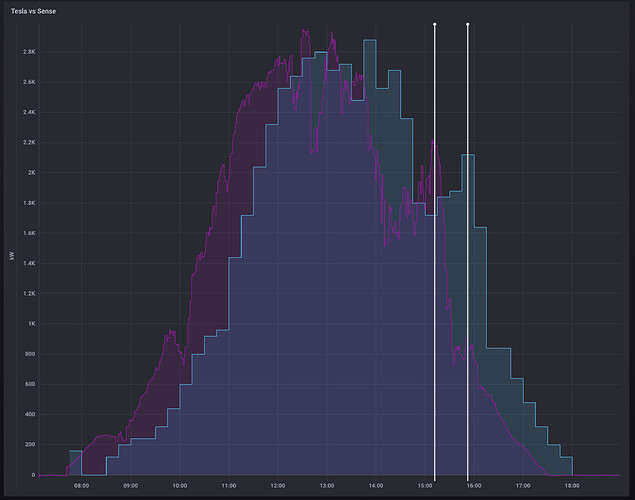 Here’s the correlation result if I offset the Tesla waveform by 30 min to the left - better ! 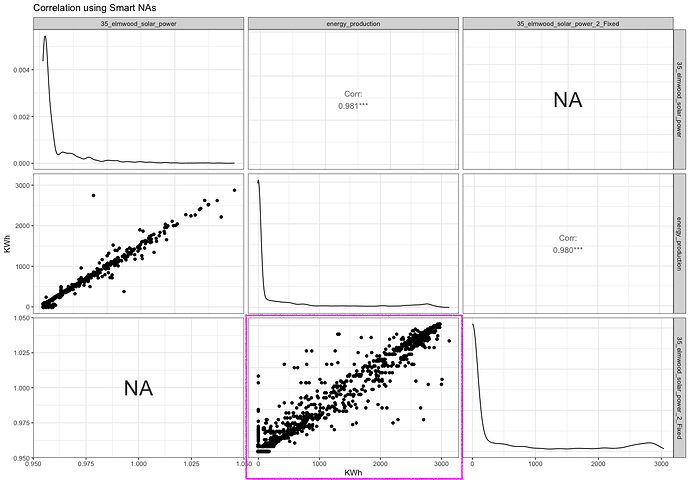 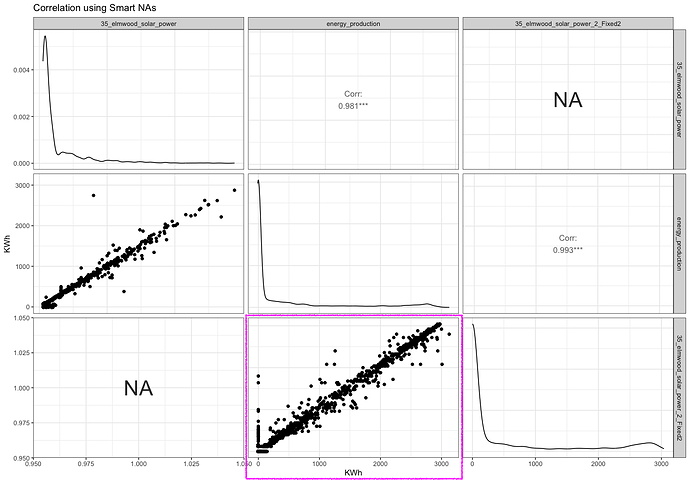