Where is my Furnace bubble?

Sense has recognized my furnace. I get notifications when it turns on and off but sometimes the furnace bubble is there and sometimes it’s not. Why? See screen shots below. 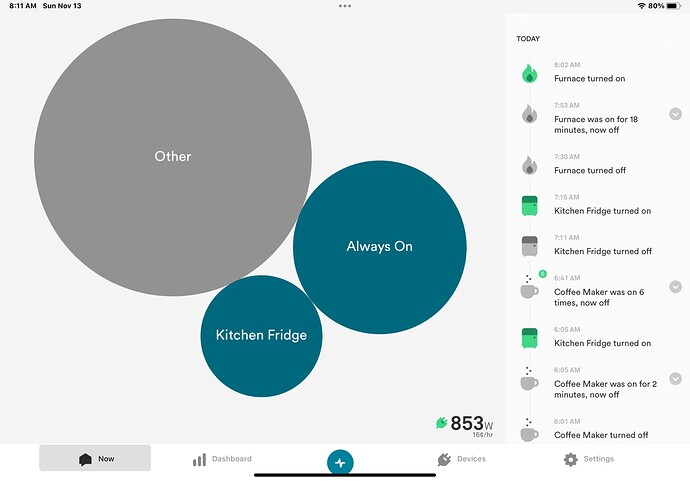 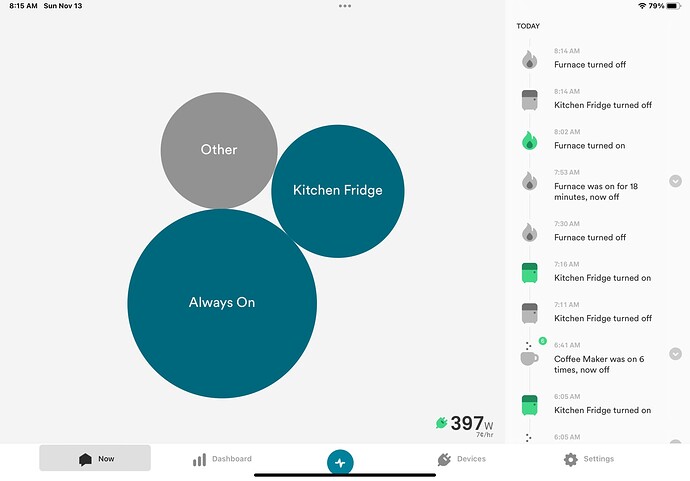 Interesting. Looks like the Other bubble grew and timeline shows the Furnace turning on. Wondering if this might be the inklings of the new Progressive Detection Sense has been working on. Part of the idea behind progressive detection is that there are some devices that can only be detected in arrears (well after they have already been running for a bit), because they have longer power up ramps or greater complicity to their starts and stops than the traditional native detection can “see”. Hmmm.

Yes, something strange is happening.

My “Other” has been showing ~50 watts at times over the past week and I know nothing that is unknown is pulling any power.

Then tonight I was getting ~200 watts on the “Other”. I do not have anything that could pull 200 watts that isn’t on some type of monitor.

And all the sudden, poof, it disappeared. And nothing else changed in usage. And the graphs are showing no historical use on “other” even when it’s reportedly using power.

It’s looking more like something strange is going on with the reporting as opposed to a new feature. 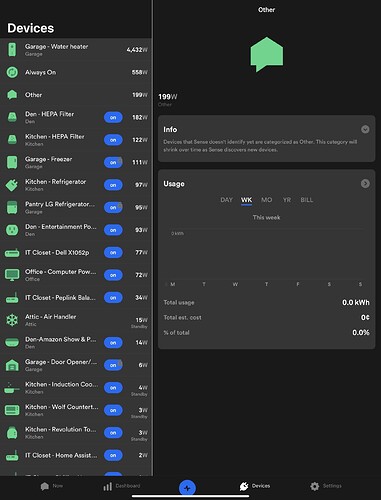 Some of my bubbles do weird things similar to this. I notice it most often on my Dryer, but have seen it occasionally on other devices. The issue is intermittent: sometimes present, sometimes not. It has been this way for nearly a year. I have not tried to reach out to support since it is an intermittent issue. Those are hard enough to describe, and harder yet for them to track down. I just live with it. Thankfully it doesn’t happen to most bubbles. I don’t have any advice for you, but wanted to let you know you are not alone.

I saw this and it jogged my memory on another post I have on my heat pump. I would see the other bubble grow in steps until it disappeared and the mini split bubble popped up. It was the same bubble I have been seeing during the summer when in cooling mode. It was detected as device 4 awhile back and I labeled it (mini-split). Anyway, after a few times it quit doing that and now just shows in the other bubble while in the heat mode.