Sense showing ZERO for Home Consumption and all Power being sent to the Grid ?!

New Sense user here as of Tue Dec 13, when the Sense device was installed in my Electrical Panel. Everything appeared to be working as it should.

Fri, Dec 16th
I get PTO to flip the breakers for my newly installed 8 KW Solar System,

On the iOS App on my iPhone, I wen to: Settings: Connected Devices: Solar to setup the Solar. It never was able to detect the Inverters being turned off. I ran out of sunshine that night, and gave up.

Sat, Dec 17th
Solar is magically working on it’s own, but I still am not able to complete the Solar Setup.

Sun, Dec 18th
Same as the day before, all appears to be functioning normally, I setup Sense on an old unused 8" Amazon Fire Tablet that will now live at my office desk to show Realtime numbers, note the 3,936w of Solar and 1,478w of Home Consumption 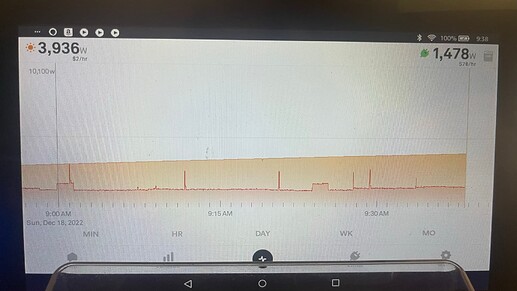 In an attempt to Zero out the 8w of Solar production at Night, I opt to attempt to Calibrate Solar again, it fails at detecting Off on the Invertors again.

I post a message here in the forums, @kevin1 suggest that I need to reach out to support and have them configure something remotely.

I reach out to support via that night via the website Support replies back that they have remotely completed the Solar Setup for me.

I verify I zee ZERO on my iPad, my iPhone, and my Samsung Galaxy Note 8, as well as the Web Interface as shown in this screen shot below (just before I took these screenshot, my Home Consumption jumped up into the 600w + for a moment… then dropped back to zero… (I thought Sense was fixing this as I typed this… perhaps not) 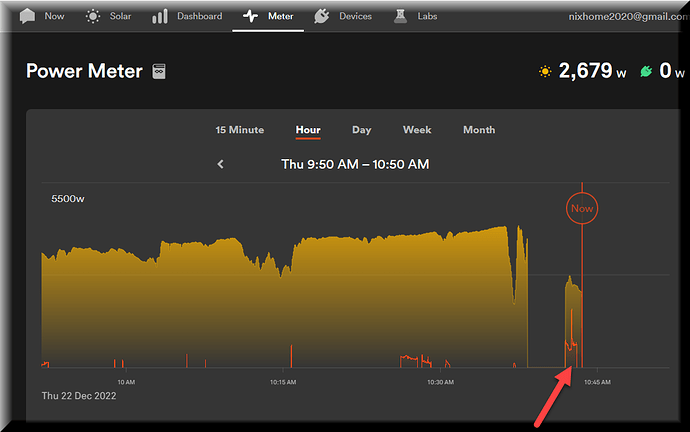 Wed, Dec 21st
I reach out to Sense via Live Chat. I basically get nowhere with that interaction, the tech does have me check “Signals” for my Mains to see if anything is showing negative.

It is. He says he’ll open a ticket and send it up. 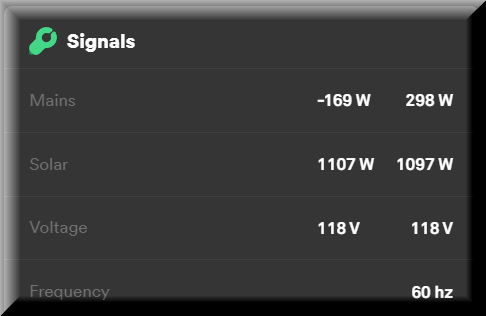 And, here I sit, wondering why was everything working, and now it’s not ?

Negative on the mains is a pretty good indicator that your configuration got borked. Sometimes support can do that by accident when they are trying to readjust. I have also seen a few situations recently on the Community where a working configuration gets corrupted. Time to keep checking in with support until they get it right.

I wanted to let you know we are looking into your issue. Unfortunately, I cannot get to it today, but I have made a note and will try to get you an answer by next Tuesday or Wednesday. I understand this is a while away, but it is due to the holiday schedule. Please have a happy holiday; we will gladly help you when regular business resumes.

If you want to get started on this, please email: support@sense.com and ask for this ticket to be escalated to James Drew. Please also include the link to this thread and provide a schematic and photo of your solar setup and panel. This will help us look into the specific issue related to your setup.

Thanks for your patience while we work to help you!

Hello @JamesDrewAtSense, thank you for your reply.

My Sense system appeared to be working fine, until a change was allegedly made by Sense Tech Support, so can you simply revert back to my previous setup? (One would assume that Sense has a Backup of the previous setup? aka 'Undo" ?)

Is there any Harm at doing a factory reset on my Device, and starting over? As it is now, the historical info that is being creating now, is completely wrong.

I have been looking into your issue, and it appears some of the data issues that some of the issues related to negative on your mains and the power meter not updating correctly seem to be resolved. I could also independently confirm a problem with the power meter that may have been fixed since 23 December 2022.

Can you check your app and confirm if everything appears to be resolved? If it has not, please let me know what specific issue you are still having so I can take a look.

Finally, I would not advise doing a factory reset as that would completely delete your account and disconnect your Sense. Instead, if you wish, you may want to do a data reset. This will wipe all data and start over, but you will still retain your account. A data reset may not be necessary, as the issue may be resolved. Suppose you want to clear all erroneous data though it could be helpful. There should be no harm to your account, except everything previous to the time of deletion will be gone.

If you want to do a data reset, you can do this by opening your Sense app > Settings > My Home > Monitor > Reset Data > follow the prompts.

Thanks again, let me know how I can help.

Thank you for reaching back out to me.

Yes, the Mains are no longer negative, so I assume that’s resolved now (although I wonder what caused this to occur) 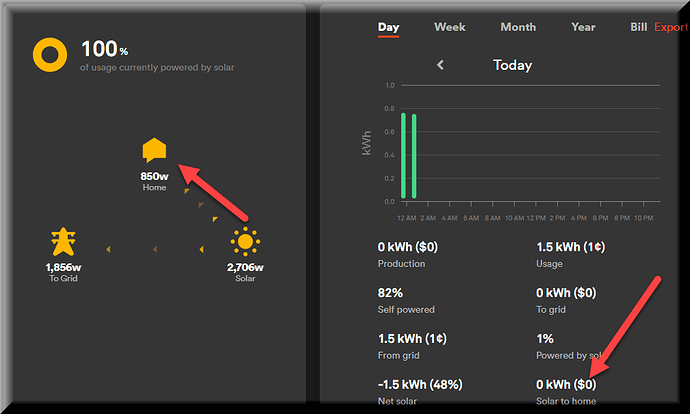 Today is the first day of my Bill Cycle, and I see that I’m 'Trending to $424"… … I have solar, and would hope I’m trending to a number much lower than that. Does this take Solar into account?

Beings today is the start of my billing cycle, and data seems to be erroneous now, I am going to reset my data as you suggested, but will wait for your answer on why it shows Zero Solar to Home and trending to $424

I also noticed that my Network test has failed (see this on the app, but this item is not seen on the web interface?) 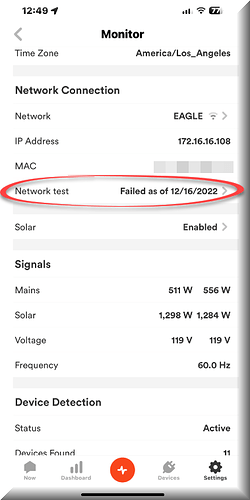 So, I reinitiated the test and get “potential issue with your connection” showing an Upload Speed of 53.3 kB/s…": 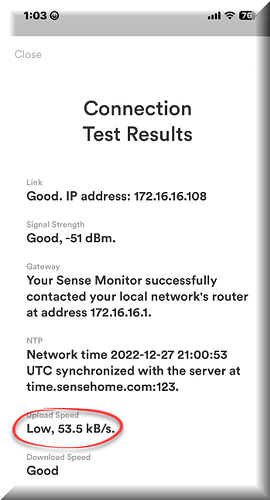 Odd that the 'Upload Speed" is this low, as I have fiber to the house, and the Sense Wifi Antenea is litterely four feet from my Cox Router along the same wall.

@nixhome2020,
Are you doing the Ookla Speedtest from a wired or wireless client device ?
The important things to understand about the router / WiFi connection to Sense are that:

The picture below gives some insights into the real WiFi limits my main Sense is seeing. The antenna is about 6 feet from my router/access point combo. The top stuff circled in red highlights the type of connection and signal strength seen by the router / WiFi from Sense. The bottom circle gives the max transmit (TX) and receive (RX) speeds of that link given the type of connection, and given the interference/noise at that point in time - so 72Mbs is the max for my setup. 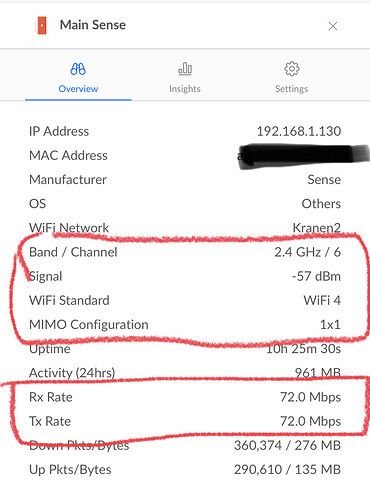 There are other possible reasons Sense might see the speed as too low, if you are doing things like DNS filtering, as well.

Hi @nixhome2020, I am looking into the “Solar to Home” issue and replied to you in the ticket. I need more confirmation on what exactly this feature does and confirm if it is currently functional before I can say much publically, but I can assure you I am looking into it. I want to make sure I don’t say something here I have to take back later. What I can confirm is it is certainly new.

Thanks for your patience!

@nixhome2020 I looked into this quickly, and it seems like while your upload speed may not be super optimal, it is also not bad, and seems like you are able to remain connected. I wouldn’t worry too much unless you find that you are having issues staying connected. These things are also best handled by submitting a ticket so we dive further in, track this case, and troubleshoot less publically.
File a ticket here: support@sense.com

These things are also best handled by submitting a ticket so we dive further in, track this case, and troubleshoot less publically.
File a ticket here: support@sense.com

I have submitted a ticket for the upload speed issue per your advise,

@nixhome2020 and @JamesDrewAtSense, I’ll attempt to answer @nixhome2020 ‘s original question about the “Solar to Home” field based on what I have seen here in the Community. That field showed up with several others back in early November. It appeared to be a premature reveal of yet-to-be-announced capabilities in the Web App.

Sense removed most of those yet-to-be functional fields, but left the “Solar to House” in mid-Nov.

Sense removed most of those yet-to-be functional fields, but left the “Solar to House” in mid-Nov.

Thank you for the info on why this is at Zero, It lead me to believe something still wasn’t configured properly. Having this knowledge that it’s an ‘early reveal’ of functionality to be implemented later works for me.